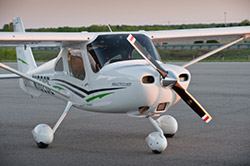 If only humans could lose weight as easily as the Skycatcher just did. McCauley Propeller Systems, owned by Textron as is Cessna Aircraft Co., got its composite propeller for aircraft approved. That means the payload for the Skycatcher just went up by four pounds.

It is a two-blade, fixed-pitch propeller that Cessna had hoped would be ready when deliveries started. It made the aircraft four pounds heavier than Cessna had promised. New owners of the aircraft, also called the Cessna 162, can now get the composite propeller in place of the metal prop that came with the aircraft.

“This is the first of a planned family of composite propellers we have in development, designed for a range of aircraft,” said McCauley Vice President and General Manager Peter Wilkinson. “We’re excited to have this announcement come on the heels of our consolidation of McCauley.”

The 1L100 is a new all-composite, fixed-pitch propeller specifically designed for the Skycatcher's Continental Motors O-200D engine (Continental is also a Textron company). It consists of a continuous fiber, single-piece design giving it high strength as well as light weight. McCauley will continue testing to gain FAA CFR Part 35 certification, making the propeller available to a wider range of aircraft.

Cessna, which owns McCauley, consolidated the company’s operations in early July to better focus resources on development programs such as the 1L100.