Get the app Get the app
Already a member? Please login below for an enhanced experience. Not a member? Join today
News & Media Klapmeier teams up for new turboprop project 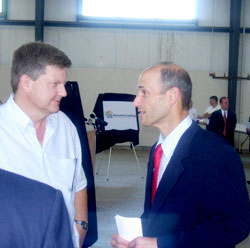 Former Cirrus Aircraft Chairman Alan Klapmeier has made a public return to the development of breakthrough technology aircraft, announcing that his new company, Kestrel Aircraft, will certify and build the single-engine Kestrel JP10 turboprop at a decommissioned naval air station in Maine.

Klapmeier and company co-founder Anthony Galley were flanked at an airport news conference in the state capital of Augusta by Maine Gov. John Baldacci and other state and local officials eager to launch a business venture poised to invest $100 million and carrying an eventual promise of 300 high-tech jobs for the recession-bound state. Kestrel Aircraft will begin work this fall at a newly leased facility at the Brunswick, Maine, Naval Air Station, which was ordered closed as a military installation five years ago, but is striving to re-emerge as a business and technology center. Just before the July 23 news conference began, the redevelopment authority that entered into the lease agreement with Kestrel held a ceremonial vote to approve the project at the airport.

Klapmeier declined to divulge how long he expected certification of the 8,000-pound, 350-knot carbon composite aircraft, which once carried the designation Farnborough F1 and flies as a prototype behind a Pratt & Whitney PT-6 engine, might take. But he said that certification for the six- or seven-seat aircraft is “a multi-year process,” that could be “in the three-year range.” He added that it was possible for certification efforts “to go much longer than that.”

“We’ve got an experienced team, we’ve been through this before, we think we know where a lot of the landmines are hidden, but you never know,” he said. “In a really warped sort of way, it’s the fun part.” 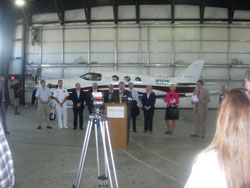 Now that he is no longer involved with Cirrus Aircraft and its SF50 Vision single-engine jet program, is there still a single-engine jet in Alan Klapmeier’s future? “There is a possibility that Kestrel will have other designs in the future,” he responded. In comparison, a single-engine turboprop boasts numerous advantages including the ability to carry large loads long distances while coming and going from smaller airports. He said that the case he must make to the financial world was that a need exists to meet future transportation demand, and that the Kestrel provides a benefit—flexibility, and therefore, productivity—in an age when the airline system is “clearly stressed in a lot of ways.” Klapmeier said he also sees a prospect overseas for large future markets in Europe’s well-developed general aviation system and elsewhere.

The lease option entered into for a 170,000-square-foot maintenance facility marked a milestone for the Midcoast Regional Redevelopment Authority, which has been striving to promote its Brunswick Landing facilities as a center for the aerospace and composite technologies industries. Klapmeier next planned to fly the prototype from Maine to Oshkosh, Wis., for the 2010 EAA AirVenture, which begins on July 26.

Klapmeier took the opportunity presented by the media event to deliver an impassioned appeal to the news media, urging them to re-examine their perceptions of general aviation and to appreciate that GA aircraft such as the Kestrel could launch quickly on highly productive missions, perhaps keeping people working rather than—as often depicted—transporting a CEO to a round of golf.

Editor’s note: Klapmeier will discuss his new venture with AOPA Pilot Editor in Chief Thomas B. Haines on AOPA Live at AirVenture Wednesday, July 28. Tune in to AOPA Live for live programming from 10 a.m. to 2 p.m. Central time Wednesday and 9:40 a.m. to 2 p.m. Thursday and Friday during AirVenture interviews with industry leaders, airshow stars, and more.