Get the app Get the app
AOPA will be closing at 1:45pm ET on Tuesday, December 6th. We will reopen Wednesday morning at 8:30am ET.
AOPA Members DO more LEARN more SAVE more - Get MORE out of being a pilot - CLICK HERE
News & Media DC-3s prepare for mass Oshkosh arrival

December 2010 marks the seventy-fifth anniversary of the iconic Douglas DC-3’s first flight. From July 23 through 26, the airport hosted The Last Time, likely the last major reunion of DC-3 aluminum and engines—as well as the pilots who flew them, machinists who built them, and mechanics who maintained them. Thousands of people, including aviation aficionados and area residents, flocked to the airport Saturday and Sunday to see the aircraft. Many were opened for tours. 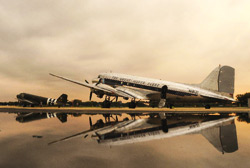 The event closed with a mass formation fly-by on Monday, July 26. Many of the vintage transport-category aircraft planned to continue flying in formation to Oshkosh. Limited aircraft parking at Wittman Regional Airport—the result of heavy rains the previous week—left some pilots reconsidering their options over the weekend, but EAA confirmed parking availability and the DC-3s are expected to make an overflight around 2:30 p.m. before landing.

Forty-three aircraft registered to attend the Rock Falls gathering, but because of maintenance and travel issues, organizers expected 30 to 35 airplanes to attend. The airport temporarily closed Runway 18/36 to provide parking for transient GA aircraft.

The Last Time hosted several pilots of Douglas C-47s that flew in the D-Day invasion of Europe during World War II—and one of them got to fly to the event in one of the airplanes that he piloted during the war.

Douglas C-47 serial number 42-32832, which flew with the 53rd Troop Carrier Squadron, brought several members of the late Don King’s family. He flew the airplane, now N5160X, during Operation Overlord/Operation Neptune in the Allied invasion of France, as well as countless paratrooper and supply missions in the European theater. Also on board was Gerald Parker, a fellow pilot and longtime friend of King; the two flew that C-47 together before Parker was assigned his own aircraft.

The airplane sustained considerable combat damage during a mission King and Parker flew together on July 11, 1943—King’s twenty-third birthday. “This airplane was shot up pretty badly,” Parker recalled. “They patched it up and kept flying. And it’s still flying. You can’t see the patches—I checked where I knew there were holes.”

Among other combat damage, the airplane was hit by an antiaircraft tracer round that penetrated the aircraft—and King’s parachute, missing him by inches. The round set King’s parachute on fire. King saved the parachute, and his family gave part of it to Glover in appreciation for his efforts in restoring the airplane.