Get the app Get the app
Already a member? Please login below for an enhanced experience. Not a member? Join today
News & Media Terrafugia unveils next-generation roadable aircraft 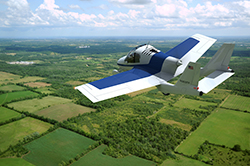 Terrafugia unveiled a model of its next-generation flying car July 26 that the company expects to fly publicly for the first time next year at AirVenture 2011.

The new model is a more refined version of the twin-boom, folding wing, pusher the company designed in 2006. It uses the same 100-horsepower Rotax engine to drive the propeller in flight and rear-wheel automatic transmission on the road.

Terrafugia CEO Carl Dietrich said the Transition will incorporate aircraft and automobile safety features and become “one of the safest light sport aircraft in the world.”

Terrafugia officials say the Transition “roadable aircraft” will cruise at 105 miles per hour, drive at highway speeds, and fit in a one-car garage. Terrafugia obtained FAA permission for a 110-pound weight increase from the normal LSA limit of 1,320 pounds.

The original Transition proof-of-concept vehicle was on display at AirVenture. The Transition made a total of 28 flights near the company’s headquarters in Woburn, Mass., before being retired.

Terrafugia hasn’t set a retail price for the redesigned Transition. The original was set above $180,000. Company officials said Terrafugia has orders for 80 Transitions.

Editor’s note: Tune in to AOPA Live Thursday, July 29, to hear from Terrafugia CEO and co-founder Anna Mracek Dietrich about the new design for the Terrafugia Transition roadable aircraft.