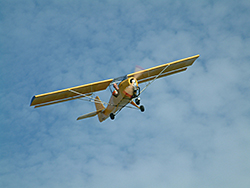 The standard Superlite has upgraded features including a recovery parachute and sells for $40,066. Belite aircraft models are all designed to provide recreational flyers with economically priced, easy to build and operate aircraft that make flying affordable and accessible.

In order to remain with FAR Part 103 parameters, the 50-hp engine is limited to approximately 38 hp to ensure that ultralight cruise speed limitation of 62 mph is not exceeded.

Belite also offers a tricycle-gear Supertrike ultralight priced at $42,256. The standard model sells for $26,995. Owners can reconfigure the aircraft back into the conventional gear if they choose.

The ultralights can also be mounted on floats and operated as a seaplane. Belite Aircraft, in conjunction with MukTuk Floats of North Vancouver, British Columbia, offers a straight float kit allowing pilots to convert any Belite into a seaplane. The Float Kits are priced at $2,000.