Get the app Get the app
News & Media Flight Design displays &lsquo;Lite&rsquo; model

Flight Design is displaying the CTLS Lite at EAA AirVenture, which dramatically lowers the price and substantially raises the payload. Based on the CTLS, the CTLS Lite is aimed at making the model more affordable and a better performer.

“Our all-carbon-fiber CTLS Lite brings top performance and a greater payload,” said Tom Peghiny, president of Flight Design USA. “And the CTLS Lite does this while dropping the cost more than $20,000.” Peghiny indicated that the price drop is partly achieved by carefully selecting American-sourced avionics and other components. He said that a strategic lightening of the airframe in non-structural areas and slimming the equipment list helped engineers remove more than 50 pounds of weight, translating to greater payload. 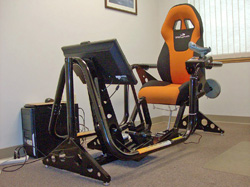 The CTLS-Lite can fly on amphibious gear. Developed by Flight Design distributor Airtime Aviation of Tulsa, Okla., in cooperation with Clamar Floats of Ontario, Canada, the project fills another niche in the company’s line of aircraft. The German company also manufactures the carbon fiber CTLS, CTLS-HL, and the all-metal MC.

Flight Design also offers a simulator called Dreamflyer to deliver a full-motion flight simulation at a light-sport price point. It offers  roll and pitch oscillation to help the pilot perceive the feeling of flight. Flight Design provides customized CTLS software based on the popular X-Plane platform for Windows, Mac, or Linux.

Retail price for a ready-to-use Dreamflyer with computer, X-Plane software for CTLS, based on a single monitor setup, is $5,995 in the continental United States and Canada. An optional three-monitor assembly kit is available for an additional $199. Dreamflyer was selected as an Innovations 2008 Design and Engineering Award honoree in the Electronic Gaming product category.