Flight Design looking to the future 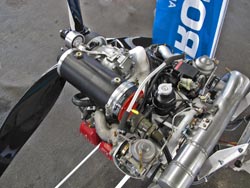 There are advantages to being the most popular light sport aircraft company on the planet (with challengers close behind), and one of them is having the budget to expand and do research on future models.

Flight Design is expanding its reach with a new production certificate issued by the Chinese government—becoming the first company to get such a document, Flight Design CEO Matthias Betsch said.

Research indicates a hybrid engine is the “suitable step to an all-electric line,” said chief technical officer Oliver Reinhardt. Work on the engine is in progress.

The company has developed a five-hour transition course and found an insurance company that gives a 10-percent break to new owners who take the course.

Other light sport manufacturers interviewed at EAA AirVenture indicate buyers are showing renewed interest, although hesitant. One said sales picked up well in the spring, and suddenly flattened in June. Another light sport official said it is an “odd” economy and hard to predict.

Overall, said Flight Design USA President Tom Peghiny, 2009 was “better than we feared,” and 2010 is “slower,” although sales have started to pick up in the last six weeks. Based on reaction from buyers at AirVenture, Peghiny said he expects a “good end of year.”