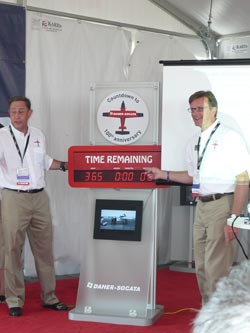 Socata is counting down: 365 days until the 100th anniversary celebration for the aircraft manufacturer. The manufacturer of the TBM 850 traces its roots to 1911 when the Morane-Sauinier company was born. Today Socata is a part of Daher-Socata, and it is planning a yearlong celebration in 2011 culminating at AirVenture 2011 when company officials hope some 100 aircraft from the varied product lines will converge on Oshkosh, Wis.

Daher CEO Patrick Daher, grandson of the founder, started a countdown clock to next year’s party at a press conference on July 27.

At the media event, Nicolas Chabbert, president of Socata Aircraft of North America, noted that the company delivered 36 TBM 850 single-engine turboprops last year and plans the same number this year. The number is likely to remain flat next year unless there is a significant change in the economy, according to Chabbert.

Meanwhile, the company continues to enhance the Garmin G1000 cockpit system in the TBM 850. Synthetic vision debuted last year, and this year data logging was added.

Daher vowed to continue investing in the TBM product line for the next 20 years or more, calling it “an excellent platform.” Meanwhile, the company is at work on a new twin-engine airplane, but he would not disclose details. A project team to flesh out the design is hard at work, he said.