Get the app Get the app
Already a member? Please login below for an enhanced experience. Not a member? Join today
News & Media FAA warns GA accident rate needs improvement 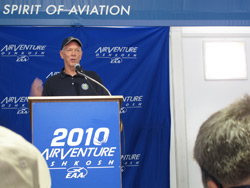 FAA Administrator Randy Babbitt warned that general aviation accident numbers are “…candidly, not where I or the folks in the FAA would like them to be.”

Progress toward a lower accident rate has constantly improved, but the goal set by FAA officials has not been met, he said. He said AOPA and Experimental Aircraft Association officials are working to help reduce the accident rate through safety programs.

This year so far there have been 120 fatal GA accidents. That’s down 8 percent, but Babbitt said he wants it down further than that. “Last year amateur built aircraft accounted for about 25 percent of all of our GA aviation accidents.” However, they represent only 10 percent of all aircraft. Babbitt said he personally believes the accidents could be reduced if there was better transition training for pilots who buy new or more complex aircraft. “Often these airplanes are more sophisticated,” he said.

Babbitt said he is confident a replacement for leaded avgas will be found, but said he has asked the EPA to “…please don’t get ahead of us.” He said he is comfortable that a suitable alternative fuel will be developed before lead is removed from avgas.

Babbitt also made a pitch for professionalism, saying it is not something the FAA can regulate. He urged pilots to seek out continuing training to maintain a high level of proficiency. It is one of the best ways to reduce the accident rate, he said.

Babbitt also gave a plug for the NextGen navigation and control system the FAA is working on, and ADS-B ( Automatic Dependent Surveillance-Broadcast). It will make possible for all pilots the in-flight weather and traffic information that thousands of GA pilots have enjoyed for a decade through the transition to glass cockpits. ADS-B out (transmit) will give pilots the same view the air traffic controller has, and will be accurate to a few feet, while current radar air traffic control systems are accurate only to a few hundred of feet.