DC-3 returns to the sky 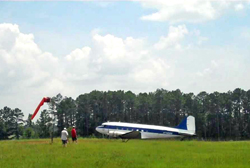 It was a rude awakening, and the Douglas DC-3 complained a bit, but finally N74589 arrived at EAA AirVenture 2010 after 10 years in the weeds.

The aircraft flew for the first time July 24, just two days before the opening of EAA AirVenture. The flight went well except that the left engine broke a piston. The engine was replaced, and the crew had hoped to fly it to Oshkosh the same day. Last minute tasks prevented that.

Instead, the DC-3 left for Oshkosh, Wis., July 27. However, the British crew had to land at Fond du Lac, Wis., after the Oshkosh airport was closed because of a crash landing involving Nascar owner Jack Roush (he remains in serious but stable condition). After repairing a burned cowling from an exhaust leak, the aircraft was flown from Fond du Lac to Oshkosh July 28.

Veterans may want to say hello. There’s a chance they rode in the aircraft on D-Day.