Get the app Get the app
Already a member? Please login below for an enhanced experience. Not a member? Join today
News & Media Cessna tackles water contamination in avgas 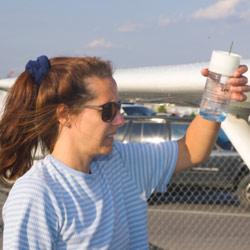 A top-priority item on every pilot’s pre-flight checklist is inspecting the fuel for contaminants, including water. To help pilots of Cessna model 100, 200, and 300 series aircraft better check for water in their fuel tank systems, Cessna Aircraft Co. has released a special airworthiness information bulletin with nine recommendations.

Cessna encourages pilots to make sure that their fuel system is equipped with fuel drain valves in all drain locations. “There is no single point of drainage that can be used to check for all fuel system contaminants simultaneously,” the bulletin emphasizes. “Take the time to properly check all drain locations, all of the time.”

The bulletin also recommends that pilots use the “raised, umbrella-style fuel filler caps to preclude water ingress” and take all necessary precautions to prevent water from seeping into the fuel take system from internal or external sources. It also suggests pilots become familiar with their fuel supplier and provides five points to be covered during the annual or 100-hour inspection.

With regard to checking the fuel, Cessna recommends that pilots start at the highest drain location and move downward, checking all sump locations before every flight; “drain at least one cup of fuel from each location”; sump all locations if any contamination is found; and take repeated samples until the contamination is removed. It also suggests that pilots “have qualified maintenance personnel drain and purge the fuel tank system. Remove all evidence of contamination prior to further flight.”

The bulletin, which covers a wide range of Cessna’s aircraft, was sparked by recent safety information on the Cessna 150, 170, and 172 series aircraft that caused the company to re-examine its efforts to prevent water-contaminated fuel.

Water in fuel can appear as a small clear mass droplet at the bottom of the fuel strainer, but the bulletin also points out that “Water suspended in the fuel may lead to a cloudy or hazy appearance in the sampler cup. Water may have dissolved in the fuel, but the conditions have not yet occurred to cause the water to come out of solution and perhaps adhere to the dry tank upper surface or walls (similar to condensation).”