Get the app Get the app
Already a member? Please login below for an enhanced experience. Not a member? Join today
News & Media Quest racks up nine government sales, shows new options 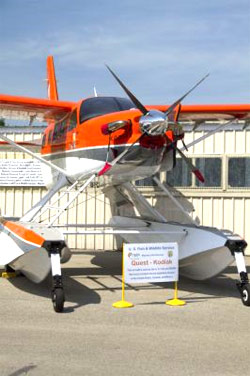 Quest also announced that a weeping-wing ice protection system—manufactured by CAV Aerospace—is in flight test and awaiting certification. On display at the 2010 EAA AirVenture were two other new options for the $1.67 million Kodiak: air conditioning (a $33,500 option) and an external cargo compartment ($55,500). The external cargo compartment offers 65 additional cubic feet of storage and can carry up to 750 pounds.