Get the app Get the app
AOPA will be closed July 4th, in observance of the Independence Day holiday. We will reopen at 8:30 am ET on Tuesday, July 5.
News & Media Answers for Pilots: Alaska! 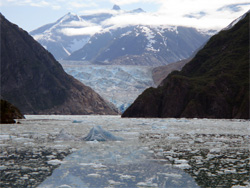 It’s June and flying activity is in full swing in Alaska! For those of us in the lower 48 states, flying there can be the adventure of a lifetime. If a trip of this magnitude is on your radar, here is some practical information to help make that dream a reality.

Although Alaska isn’t an international destination, most general aviation aircraft will need to stop in Canada for fuel along the way. So, the international procedures for flying to Canada apply to that portion of the trip. AOPA has a detailed Web page on what’s required for flying to and in Canada, but here are the basics. All persons aboard the aircraft need a current passport, and the pilot needs a current pilot certificate, medical certificate, and restricted radiotelephone operators permit. All U.S. registered aircraft must have a standard Airworthiness Certificate, a permanent registration certificate (no temporary certificates/pink slips), a radio station license, and a transponder. Please check AOPA’s Web site for more complete information, as it’s too lengthy to include it all here.

Once crossing the border into Alaska, you have truly entered into a different world from what flying is like in most of the continental states. While many maps relegate the state to an inset in the corner, in fact Alaska occupies an area about one-fifth the size of the rest of the country. The vastness of the state combined with a sparse aviation infrastructure (airports, weather reporting stations, RCO’s, weather or ATC radars, etc.) means fewer alternates, more generalized weather forecasts, fewer places to refuel. You are much more “on your own” to navigate the largely undeveloped and rugged landscape. Consequently, you’ll need to obtain current flight charts, do your homework thoroughly, and take to heart the boy-scout mantra, “be prepared.” The following is some information very specific to Alaska that we want to cover in this column.

The rules for filing notices through the Electronic Advance Passenger Information System (eAPIS), or other approved program, when traveling to or from foreign countries have been in effect for a year. Pilots must file manifests through eAPIS at least 60 minutes prior to departure when arriving in or departing from the United States. CBP has notified AOPA that it is issuing noncompliance notices to pilots who do not file both the notice of departure and notice of arrival with CBP. The noncompliance notices do not carry a fine, but they warn that not filing passenger manifests according to CBP guidelines could incur a penalty of $5,000 for the first violation and $10,000 for each subsequent violation.

So, when you are flying round trip from the lower 48 through Canada to Alaska, you will need to file a total of four eAPIS manifests for when you 1) depart the states and cross the border into Canada, 2) cross the U.S./Canadian border to arrive in Alaska; 3) depart Alaska into Canada; and 4) arrive back in the United States at a U.S. CBP airport of entry. If you know the dates of your border crossings, you can file all four manifests before you ever leave your home. If you are just overflying Canada – departing from the U.S. mainland and landing in Alaska with no stop in Canada – you do not need to file any eAPIS manifests.

AOPA Air Safety Foundation has a free online course, “Understanding eAPIS—A Pilot's Guide to Online Customs Reporting” that guides pilots step-by-step through the online reporting process. And you can read answers to the most frequently asked questions about eAPIS online.

The state of Alaska requires pilots to carry emergency equipment in the aircraft year-round. The following minimum equipment must be carried in the summer months:

If you’re flying between October 15 and April 1, in addition to the equipment listed above, plan to carry one pair of snowshoes; one sleeping bag; one wool blanket or the equivalent for each occupant over four.

Beyond these specific requirements, remember it is a big state with few places to land. Have enough clothing and supplies on board that you and your passengers will be comfortable where you are. This helps avoid being put in a position to “push the weather” to your next destination.

Verify that you have insurance coverage for flight in Canada. Private aircraft must be covered with liability insurance and proof of liability coverage needs to be carried onboard. The amount and types of coverage are based on the aircraft’s gross takeoff weight. AOPA has a chart online and AOPA Insurance Agency (AOPAIA) provides coverage for AOPA members. Call 800/622-AOPA (2672) or email for more information.

Many rural communities in Alaska have banned alcohol within their boundaries – and that includes its importation, sale, and possession – and they strictly enforce this local option. Pilots flying within Alaska should check this list provided by the Alcohol Beverage Control Board or call the ABC Board office at (907) 269-0350 to check whether their destination is one that prohibits alcohol. Some local governments require that all persons arriving at the airport submit to a personal search before being allowed to enter the village. Pilots need to be aware that landing with alcohol aboard in villages that don’t allow it is very serious and may result in confiscation of their aircraft.

Alaska has a network of three Automated Flight Service Stations (AFSS), and 14 seasonal or part time Flight Service Stations (FSS) distributed around the state. These are invaluable sources of local information, operated directly by the FAA. The FAA also operates a unique set of weather cameras, which provide supplemental weather information captured at over 120 locations, and made available over the Web and at FSS locations.

Tips from the State of Alaska

Flying safely in Alaska is challenging and requires careful planning and thoughtful preparation for contingencies – even in the summer when daylight spans most of the 24-hours in a day. But here are some factors to consider:

Please make the most of AOPA’s online resources for planning your trip and give the aviation technical specialists in the Pilot Information Center a call with questions Monday through Friday, 8:30 a.m. to 6:00 p.m. Eastern Time, 800-USA-AOPA (872-2672). Oh, and one more thing--remember to bring your camera!