Get the app Get the app
AOPA Members DO more LEARN more SAVE more - Get MORE out of being a pilot - CLICK HERE
News & Media Avionics: Engine monitors

It’s taken a number of years, but electronic engine monitors are finally starting to look good enough to slot into a panel with other electric flight displays. New companies on the market, as well as some long-established mainstays, are offering incredibly robust systems at reasonable costs. 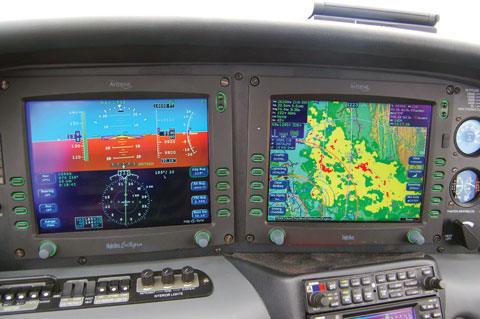 It’s taken a number of years, but electronic engine monitors are finally starting to look good enough to slot into a panel with other electric flight displays. New companies on the market, as well as some long-established mainstays, are offering incredibly robust systems at reasonable costs.

Far from being just another cool gadget in the panel, engine monitors have become highly sophisticated, and offer vital information better than their analog predecessors. Since the health of an aircraft’s engine is paramount, knowing what it’s doing at all times is a must—and a new engine monitor seems an obvious step-up for most aircraft panels. For some operations, such as running lean of peak, they’re required equipment.

We’ll focus here on the large, fully integrated displays now coming onto the market. Smaller versions, such as J.P. Instrument’s EDM-700, are still very relevant and great products, but much is known about their functionality. Instead, we’ll look at J.P. Instrument’s newer offerings, as well as those from Insight, Ultra Electronics, and Electronics International. There are also a slew of other options for pilots of experimental aircraft, many of which are less expensive than those presented here.

Whether for a certificated aircraft or experimental, many features of these engine monitors are common among all brands. At a minimum, they will show exhaust gas and cylinder head temperature for each cylinder; rpm; manifold pressure; oil pressure and temperature; outside air temperature; and fuel flow. They do this through a series of sensors or probes inserted into each cylinder, and in the case of fuel flow, with a transducer. The transducer is usually far down the system, either right before the carburetor or, for fuel-injected engines, between the engine fuel pump and servo regulator.

Each manufacturer prices a bit differently, but most offer a number of options, including carburetor temperature, turbine inlet temperature, and fuel pressure.

Electronic engine monitors offer a number of benefits over older analog displays, not the least of which is safety. They do this in a few ways. Since probes are used to measure the values, there’s no need for fuel or oil lines to come through the firewall. Also, each manufacturer builds aural and visual alerts into the system, meaning a constant eye isn’t necessarily required on the gauges to catch a problem early. Often the user is able to set additional alerts as well.

Engine management is another reason to fork over the sum for a new engine monitor. Pilots running lean of peak must have one to make sure each cylinder remains within limits. It’s also really hard to tell which cylinder peaked first or what the temperature spread is when you can’t see individual cylinder temperatures. But even pilots flying rich of peak will find benefits. Obviously, fuel savings in the form of precise leaning should be recognized immediately. But more important, proper EGT and CHT values can show that the airplane is leaned correctly and running at an appropriate temperature.

One of the biggest benefits of electronic engine monitoring in terms of engine management is the ability to download the data. Each monitor does it differently—some with simple memory cards in the instrument face, others with ports behind the panel. But no matter how you download it, that data allows you to closely monitor the history of what your engine has been doing. If a spike in EGT has you worried, for example, you can download the data and see exactly what temperatures the cylinder was exposed to. As a tool for both engine longevity and maintenance, this feature can’t be surpassed. Here are some of the other features each unit offers.

J.P. Instruments’ EDM 930 was the first large-display engine monitor for the certificated aircraft market. The full-color liquid crystal display fits in a panel space 6 inches by 4 inches; groups all the information in three sections (power settings, cylinder temperature scans, and other parameters), and displays it in bar graphs. There are four buttons on the face of the instrument for Lean Find mode, selecting which temperatures to view, and where to show the time.

Like many other engine monitors, the EDM 930 can be connected to the airplane’s GPS, linking fuel information to the flight plan. That makes fuel required to the destination and for each leg readily available. Between those features and total fuel used, fuel remaining as measured by time, and a low-quantity alarm, there’s no reason anyone should ever run out of fuel.

The EDM 930 also features shock cooling alarms, a Hobbs meter, and percent horsepower. The scanner feature constantly keeps track of the difference between the warmest and coolest cylinder, making lean-of-peak operations safer. The unit will record up to 30 hours, and data is downloaded via an optional USB port located on or behind the panel, or through a control box that’s plugged into the unit.

The EDM 930 is certified and STCed for primary use on hundreds of aircraft. It retails for around $5,000, depending on the number of cylinders.

Electronics International’s MVP-50P is a newer entrant to the market, and it comes with many of the same features as the EDM 930. Additionally, it features checklists, flight plan display, weight and balance information, and voice warnings.

The MVP-50P display is almost square at 5.55 inches wide and 5.15 inches high. It is full color, and is arranged much in the same way as the EDM 930. The difference is that the MVP-50P uses multiple pages for checklists, flight plan information, systems monitoring, and weight and balance. The basic unit is comparable to others on the market, but additional sensors for system information mean the MVP-50P can become a full systems monitoring device for everything from lights to flaps, and more. For most light aircraft the unit will display any configuration you can imagine.

Data is downloaded via a USB port on the face of the instrument. Each flight is broken down into an individual record, so sifting through the data is that much easier. Other than the USB port, all functions are through three softkeys and a select knob. At $5,995 for the four-cylinder unit and $6,495 for the six-cylinder version, the MVP-50P isn’t the cheapest on the market, but it does have more features than others. It’s also now certified for primary display.

Ultra Electronics purchased the Auracle line of products, including the flagship CRM2100. The CRM2100 is also full-color, with a 5-inch display area in a 6.25-inch by 4.5-inch box. Although many of its functions are the same as other units, the CRM2100 takes a different route on the way some of those things are displayed, as well as how the unit is installed.

The largest portion of the display is the upper left, and includes manifold pressure, rpm, and fuel flow. The display is sort of a sliding bar graph with a curve, reminiscent of 1980s-era Chevy trucks. Thankfully, numbers are displayed next to each graph because it’s not a presentation pilots are familiar with. In the top right are the cylinder temperatures. Incidentally, they comprise the smallest section of the display, but using Lean Find mode is actually done through other screens. The rest of the display is a series of numbers for values such as volts and outside air temperature, combined with digital presentations of round dials for amps, vacuum, oil temperature, and oil pressure.

Controls on the front face of the unit include a knob to select various screens, and a function button to initiate Lean Find mode, acknowledge an alarm, and more.

Installation is unique because instead of wiring for a number of different probes breaching the firewall, the CRM2100 has a control unit mounted on the firewall that collects the data, then one cable through the firewall carries it to the unit. It’s certainly a more elegant way of doing it, but it also introduces another layer of complexity.

The unit is the most expensive on the market at around $6,995 for the four-cylinder version and $7,495 for six cylinders. It is approved as a primary display for popular Beechcraft, Cessna, Piper, and Mooney models, as well as a few others.

One of the first manufacturers to ever produce a graphic engine monitor was Insight. Now the company has a new product, the G3, that it thinks is the future of electronic engine monitors. The G3 is a small instrument that fits in a standard instrument hole, but it is multicolor and has many of the same features as the larger monitors.

The G3’s strength is the ability to show both cylinder-head and exhaust-gas temperatures at the same time, thanks to a color-coded bar graph. When a cylinder reaches peak EGT, it fills in green, making it quick and easy to identify. And when the CHT limit is reached, the bar turns red. Numerical values supplement the bar graph information.

Besides EGT and CHT, the G3 also displays rpm, manifold pressure, oil temperature, fuel flow, voltage, and more. Secondary screens include a vibration monitor, G meter, prop balance monitor, and diagnostic screen. The data is downloadable on an SD card that slips into the face of the instrument.

If panel space is an issue, the G3 looks like a promising alternative. It’s not yet certified in the United States (Insight is a Canadian company), but a company official said the paperwork is in and approval is expected soon. The unit lists for $3,200, or $2,500 as an upgrade.

With instrument panels going so high-tech, it only makes sense to upgrade the engine monitor with the rest of the instrumentation. The good news for owners is that there is lots of competition in the market.