How flying low can rob endurance

Fuel exhaustion—long known as a leading cause of accidents in light propeller aircraft—also is a real danger in turbine-powered aircraft, even those operated by professional flight crews. It’s even happened to airline crews. 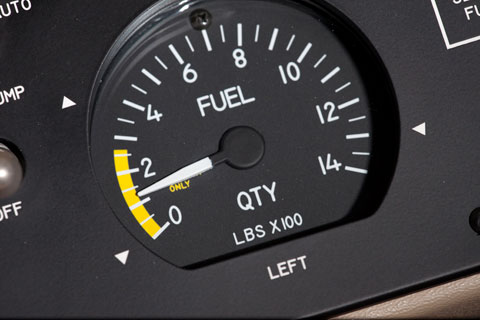 Fuel exhaustion—long known as a leading cause of accidents in light propeller aircraft—also is a real danger in turbine-powered aircraft, even those operated by professional flight crews.

It’s even happened to airline crews. United Flight 173, a Douglas DC–8 with a flight crew of three, crashed near Portland, Oregon, on December 28, 1978, after it ran out of fuel while the crew was investigating a landing gear problem. Avianca Flight 52, a Boeing 707 that also had three flight deck crewmembers, crashed in Cove Neck, Long Island, New York, on January 25, 1990. It ran out of fuel after holding for more than one hour waiting to land at a foggy John F. Kennedy International Airport, then flying a missed approach. Two other airline flights—an Air Canada Boeing 767 on July 23, 1983 (nicknamed the “Gimli Glider” after its dead-stick landing on a drag strip), and an Air Transat Airbus A330 on August 24, 2001—famously ran out of fuel and glided to safe landings with minimal injuries to crew and passengers.

A more recent accident reminds us that fuel exhaustion is especially relevant to light jet owners and pilots. On the night of January 3, 2009, two professional pilots were flying a Cessna Citation II (N815MA) under FAR Part 91 rules from the Dominican Republic to Teterboro, New Jersey. They had an 11 p.m. departure time on a night when much of the U.S. East Coast was blanketed in low IFR conditions. The crew intended to stop at Wilmington, North Carolina (ILM) along the way. ILM is the northernmost Customs stop permitted for use by flights originating in the Caribbean, and is generally the one preferred by corporate air operators destined for the Northeast.

Perhaps because of an issue with the aircraft’s RVSM status or because of strong winds aloft, the crew of N815MA flew the Atlantic routes at or below FL280, occasionally using FL270. Fuel was certainly not bountiful as the crew began its first approach at ILM, and the weather was definitely not “with the plan.” Faced with one-half mile visibility and a ceiling reported as 100 feet broken, the crew was unable to land after their first approach on the ILS. Second and third attempts also failed to present the runway in the pilots’ windscreen. The crew decided to make a fourth approach, only to have the engines flame out while being vectored on a downwind leg.

Using their GPS, the pilots turned toward ILM and aimed at the runway intersection shown on the moving-map display. At about 50 feet agl, they crew spotted a row of lights and turned to parallel them. The Citation landed gear-up on the departure end of Runway 6 and overran the pavement, coming to a stop in the midst of the Runway 24 approach lights. Amazingly, not one of the seven aircraft occupants was hurt.

The investigation is still under way, but it seems as though this accident was the result of an error chain that began with a case of get-there-itis. Any pilot who has missed an appointment with U.S. Customs will probably be able to tell a story about his or her horrific encounter with bureaucracy. Surely, the pilots of N815MA were dreading the thought of having to divert to a non-Customs airport, and the “better dead than embarrassed” mentality may have been in play. Four attempts were three too many. 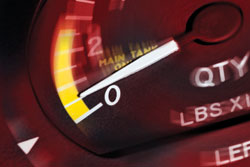 Situations like this demonstrate the need for strict adherence to one’s personal minimums (in this case, minimum landing fuel reserves) and decision-making rules. Frankly, if you miss one approach and fuel is not abundant, it’s time to go elsewhere. Bear in mind that the accident flight was operated under FAR Part 91; pilots operating under FAR Part 135 would not have been permitted to attempt the “look-and-see” approach at Wilmington in the first place.

Remember the 1-2-3 rule: If the forecast for your destination airport shows that from (1) one hour before to one hour after your estimated time of arrival; there will be a ceiling of (2) 2,000 feet or less, or visibility of (3) three statute miles or less, you must file an alternate airport on your flight plan. As for fuel, you must have enough to fly to your intended destination, miss the approach, fly to your alternate airport, and then be able to fly for an additional 45 minutes at normal cruising speed (see FAR Part 91.167).

When first making the transition to a turboprop-powered airplane or a jet, it’s easy to be unaware of how much fuel turbine engines burn at low altitude in the terminal environment. The medium-bypass turbofan engines powering today’s light jets burn much more fuel at low altitudes than they do when cruising high in the flight levels. For example, the Cessna Citation Mustang burns fuel at a rate of more than 1,500 total pounds per hour at takeoff thrust at sea level. But at 41,000 feet it burns less than 500 total pounds per hour in cruise.

Let’s compare piston and turbine engines. With a piston-engine airplane, the pilot must lean the mixture as the aircraft climbs in order to maintain the fuel-air ratio that results in optimal power and fuel consumption. If the pilot leans properly, fuel burn will decrease with altitude.

Turbine engines also have optimum fuel/air ratios that must be maintained through a range of altitudes. That’s why all modern turbine engines incorporate a device known as a fuel control unit (FCU) that serves as the interface between the thrust lever in the cockpit and the fuel valve in the engine. An FCU can be a mechanical or electro-mechanical device—possibly part of a larger Full Authority Digital Engine Control (FADEC) system—that automatically meters fuel to the combustor to ensure the correct fuel burn rate for any given altitude. Without going into the details of such things as lean die-out and rich blow-out, you simply need to know that the FCU automatically steps back the fuel flow as the aircraft climbs, resulting in drastically reduced fuel consumption in the flight levels. 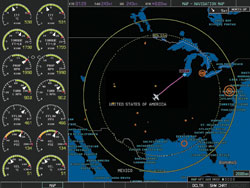 A nice feature of the Garmin G1000 avionics suite (now finding its way into new light jets) is a “range ring” on the multifunction display that shows the aircraft’s range given its current ground speed and fuel burn. The G1000 can even provide a dashed-line ring inside the absolute (tanks dry) range ring that shows how far you can fly and still have a certain endurance of fuel still in the tanks. This reserve endurance is set at 45 minutes of flying time. However, it is very important to realize that in cruise at high altitude, these range rings are lying. They are showing that you can go much farther than you really can. Why? Because once you descend and begin maneuvering at low altitude to set up for the approach, you’ll be burning far more fuel than at cruise.

Many sophisticated flight management systems found in jet aircraft do not accurately account for this. To avoid overreliance on range rings, make sure you use the preflight planning guidance in your pilot’s operating handbook. There, you’ll see charts for determining more precise times, fuel consumptions, and distances to climb and/or descend. In any case, you want to be certain to land with a safe fuel reserve. As turbine pilots, it is of utmost importance for us to understand the range limitations of our aircraft and never fall into a trap. Light jets do lots of things very well, but stretching fuel isn’t one of them—unless you have a nice tailwind! Bottom line: Plan your flights with adequate fuel reserves and safe alternate airports in mind—and be ready to carry out Plan B without hesitation when necessary. You do have a Plan B, don’t you?

Ben Marcus is co-founder and CEO of jetAVIVA, a light jet sales and acquisition specialist firm.