Get the app Get the app
Already a member? Please login below for an enhanced experience. Not a member? Join today
News & Media Frugal Flyer: Mobile maintenance

When Brian Wallis works on airplanes in remote areas, he doesn’t worry about bringing generators or the fuel to feed them. Everything he needs, from an engine hoist to an air compressor, fits in a small trailer, and his power tools, computer, and printer get their power from his car—or the sun. 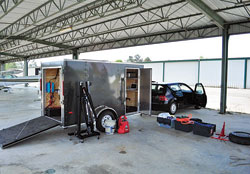 When Brian Wallis works on airplanes in remote areas, he doesn’t worry about bringing generators or the fuel to feed them. Everything he needs, from an engine hoist to an air compressor, fits in a small trailer, and his power tools, computer, and printer get their power from his car—or the sun.

“Next week I’m doing an annual inspection on an ag plane in a hangar in south Georgia that doesn’t have electricity, and it’s just no big deal,” said Wallis, 33, an A&P mechanic with inspector authorization, helicopter flight instructor, and commercial fixed-wing ratings. “I’ve found ways to do the work that are efficient, environmentally green, and just a heck of a lot more economical and cost-effective way to do business.”

Wallis drives a diesel Volkswagen Golf that gets 48 miles per gallon and runs on reclaimed vegetable oil, and he uses it to tow and power a trailer full of aircraft maintenance tools. The car’s engine provides power through a 120-amp alternator to a heavy-duty, 225-amp-hour battery that powers his tools, computer, printer, and cell phone. He’s also got a solar panel that gives the battery a 15-watt boost when the sun is out.

Wallis splits his time between the Gwinnett County Airport near Atlanta, and West Palm Beach, Florida, so sunshine is rarely in short supply. When it is, he simply starts his car engine and runs it for a time to recharge the battery.

The car’s engine has a high-power fuel pump to give it enough zip to tow Wallis’ trailer. And he’s put almost 400,000 miles on the 2002 vehicle to date.

Wallis learned his trade as a U.S. Army UH–60 Black hawk helicopter crew chief, and he’s been an IA for five years. His current projects include engine overhauls and aircraft restorations that take place in fully equipped maintenance facilities. But some of his most urgent and profitable jobs come from emergency calls for aircraft that need immediate service in remote locations. 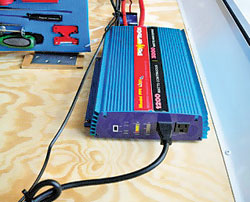 “If an ag pilot has an airplane stuck in a field, or an aircraft needs service at a remote airstrip that doesn’t have electrical power, it’s not a problem for me to get there and get those jobs done,” he said. “I can go just about anywhere with my tools and get things working again. By comparison, the cost of taking the wings off an airplane and trailering it to a service center—and all the down time that would entail—would be astronomical.”

Wallis grew up around airplanes. His father, Larry Wallis, is a private pilot and taught him to fly the family’s Cessna 177 Cardinal. Wallis owns a Vans RV–3 that he uses to commute between Florida and Georgia. A trip between West Palm Beach and Atlanta takes about 10 hours in the car, he says, but just three hours in his single-seat airplane. (The airplane gets about 21 miles per gallon.)

Wallis said he has long been interested in finding ways to reduce the cost and improve the efficiency of flying and maintaining aircraft, and he’s aligned his business, Wallis Aviation Inc., with those personal goals.

“Efficiency began as a hobby for me,” he said. “But it also turns out to be a much more effective way to run a business. In addition to the environmental benefits, it greatly reduces costs and enables me to perform some high-priority, niche work that I wouldn’t have been equipped to do before.”