Get the app Get the app
Already a member? Please login below for an enhanced experience. Not a member? Join today
News & Media GA in the halls of Congress

GA in the halls of Congress

When general aviation is threatened in Washington, D.C., legislators need to be informed and engaged. This happens effectively through a caucus, a group within a legislative body that shares a common interest.

When general aviation is threatened in Washington, D.C., legislators need to be informed and engaged. This happens effectively through a caucus, a group within a legislative body that shares a common interest. Caucuses bring together members of the House or Senate who want to learn about a topic with members who are knowledgeable about the subject ( see “AOPA Action: Actor Harrison Ford on the Hill,”).

Last year, AOPA was instrumental in launching GA caucuses in both the House of Representatives and the Senate ( see “State of the Association: Mission—Engagement,” May 2010 AOPA Pilot). “[AOPA President] Craig Fuller and I heard from members of the House that there was a lack of understanding with new members about what GA does—what it is and what it is not,” explained Lorraine Howerton, AOPA vice president of legislative affairs.

Discussions with members of the House about how they could educate their peers regarding GA led to the idea of a caucus. “It is nicely surprising that so many members of the House of Representatives want to learn [about GA], or share their expertise,” Howerton said. “No one ever envisioned that we would have 114 members.” A GA caucus also was established in the Senate, and it has 28 members. The House GA caucus is one of the body’s largest.

Most caucus members are not pilots—there are few pilots in Congress. Experiences in other areas provided members with an awareness of general aviation. “One-fourth of the House feels that GA is an economic engine,” Howerton noted.

What motivated legislators to participate in the caucuses? Six members—all pilots—share not only a passion for flying, but an acute awareness of general aviation as an economic development tool and business resource. 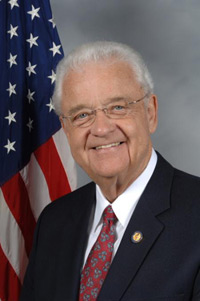 It’s apparent in the outer office of Rep. Leonard Boswell (D-Iowa) that he’s a pilot. Photos of the Piper PA–24 Comanche he owned until recently decorate the wall, and a scale model of the airplane is displayed on a shelf.

That Boswell became a pilot probably came as no surprise to his father. “I was always the one to climb up the windmill to fix things,” he explained. His father didn’t care for heights. Boswell’s first flight was in a Piper Cub as a child, and he learned to fly both airplanes and helicopters in the Army; he served two tours in Vietnam flying the UH–1 Huey.

He bought into an airplane partnership when he got out of the Army, but reluctantly gave up the airplane when the farm crisis hit. Later, he bought the Comanche—which he recently sold to Rep. John Salazar (D-Colo.). Boswell is excited about the sport pilot certificate’s potential to increase pilot training, and is shopping for a Light Sport aircraft.

Boswell learned the value of general aviation when he was elected to the Iowa legislature and served on the small business and economic development committee. Businesses considering relocation want to know three things, he said. “They want to know what you’ve got for economic development, they want to know what you’ve got for schools, and if you’ve got an airport.” Clayton Jones, chairman, president, and CEO of Rockwell Collins Radio, headquartered in Cedar Rapids, told him the company’s aircraft carries company executives only 17 percent of its flight hours—most of the time, it’s carrying engineers.

Boswell views the caucus as an advocate for and voice of general aviation. It can also remind others about GA’s contributions to economic development. “Jobs go with it,” he said. “A growing company is going to want access to an airport and to aircraft—it saves a lot of time.” 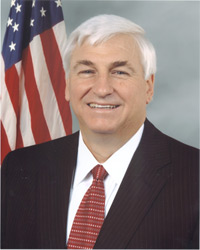 Rep. Allen Boyd (D-Fla.) developed the desire to fly in Vietnam. “I just developed a love for it. I would literally go to sleep at night and fly in my dreams.” But like many other enthusiasts, Boyd never had time to pursue flying lessons. He flew with a cousin who was a pilot, and when he was elected into the Florida legislature, he flew around his district with some pilot friends. “That’s where I really learned about general aviation,” he said.

“When I turned 60 I said, ‘That’s it, I’m going to get my license.’” He found a compatible instructor, and passed the checkride in August 2006. “I was nervous as a cat—I don’t know when I was ever that nervous,” he said.

Boyd said he flies primarily for recreation. “I’ll fly over the farm and look at the crops. And I’ll fly in the district—if the weather’s good and I have to be in Panama City, I’ll fly.” When he acquired his 1981 Cessna 172 with a 180-horsepower engine, he planned to share the fixed costs—but bought it himself when his potential partner hesitated at the last minute.

AOPA’s leadership was the impetus for starting the GA Caucus, Boyd said. “I think general aviation is so important for the country, and makes it work economically. It’s important that members of Congress understand the value of general aviation to this country.”

Boyd wants the caucus to stay focused on the next generation navigation system. “If we do that, and keep Congress focused on the value of general aviation to the country, then we’ll be successful.” He doesn’t think we’re moving as quickly as we should on NextGen. “A longer-term FAA reauthorization would help,” he added. 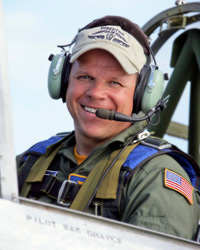 General aviation is “a small community’s connection to the world,” said Rep. Sam Graves (R-Mo.) “The biggest thing, and what a lot of people don’t realize, is just how far-reaching those fingers are into the community.”

Graves is a multiengine- and instrument-rated commercial pilot with about 2,000 flight hours who literally grew up across from Gould Peterson Municipal Airport in Tarkio, Missouri. When he’s in town, Graves helps mow the grass, trim weeds, or clear snow. “I fill in for the airport manager on weekends,” he said. “Our home community has been very supportive. Not all communities are as supportive of their local airports, and they need to be—it’s very in tune with economic development.”

He wants to continue to make the skies and airspace safe, and protect the rights of pilots and small businesses that depend on general aviation. “I want the caucus to be the entity that’s out there protecting us from the members that want to overregulate it,” Graves said. “Aviation is one of the most important things in my life. I’m very, very passionate about it.” 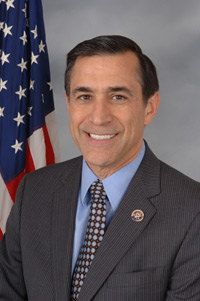 Another recreational pilot is Darrell Issa (R-Calif.), 57, who earned a private pilot certificate in 1976. “My view is that we have the finest feeder system for aviation in the world,” he said. “We have to reinvest in the things that worked for us.” That includes small airports and training aircraft, he said, mentioning the ability of a young person to hang out at a local airport and be exposed to aviation. “And that’s before you talk about people who fly themselves from point to point on business.”

A long cross-country from Kentucky to Virginia in 1976 was Issa’s most memorable flight, teaching him two important lessons. “That trip taught me fuel and weather in a way that no training lesson ever did,” he said. With the two Cessna 172s he’s owned over the years, and in the friends’ airplanes he flies today, Issa always carries extra fuel and is conservative about the weather.

Issa doesn’t fly as often as he’d like. “Being a congressman from California is the worst scenario. It’s too far for me to fly to my district.” That district includes two endangered airports, Fallbrook and Oceanside. “Getting support from a lot of my colleagues who understand the importance of these single-runway airports is important,” he said. “I realized that this could happen in many districts, and it turns out that it does.”

He would like to see the GA Caucus be more proactive, supporting more initiatives that help GA and the economy. “The federal government has invested a lot in the high end of aviation, but not nearly enough in the safety systems and efficiency of small aircraft,” Issa said, noting that there have been no major accomplishments for GA since the General Aviation Revitalization Act was passed in 1994. “Available airfields are critical. Where will that next generation of safe aircraft come from?” 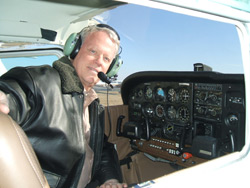 A longtime interest in economic development in Georgia showed Rep. Paul Broun, M.D. (R-Ga.), the importance of GA to businesses in the state. “General aviation is critical for a business to work,” he said. “One of the greatest economic engines of any community is an airport, so businesses have access to that transportation modality. Making sure we have a strong general aviation community, where people can operate an aircraft anywhere in the country, is absolutely critical to our nation.”

Broun earned his private pilot certificate in 1963 and is an instrument-rated commercial pilot. He has owned a Cessna 182, Cessna T210, and Beech Bonanza A36TC. “I enjoy the challenge of instrument flight and like flying in actual conditions. To break out of the clouds at 300 feet, and see the rabbit and the runway lights right there, is such a memorable experience,” he said. “Unfortunately, since being elected to Congress three years ago, I have not had time to fly.” However, he’s using flight simulation software on his personal computer to maintain instrument skills while he’s not flying actively.

His own flying has primarily been for personal transportation. As a physician he often flew to continuing education meetings. Many trips would not have been possible if he was depending on commercial aviation, he said.

“We need to develop airports and expand the ones we’ve got. We need to make sure there’s less regulatory burden on general aviation, and let people do what they need to do to foster a stronger business environment. General aviation plays a critical part in that.” 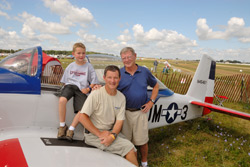 When Jim Inhofe (R-Okla.) ran for the U.S. Senate in 1994, after eight years in the House, he said his opponent should have won. “One of the major reasons he didn’t was that I was everywhere,” thanks to the use of general aviation. “You have the total flexibility” to go where you want to, when you need to, he said.

A commercial pilot and CFI, Inhofe started flying 54 years ago. He credits the ability to fly on business with keeping him engaged in aviation. “Many new pilots can’t keep flying, and they’re not in an occupation that can sustain it,” said Inhofe, who was in the development business at the time. Today he flies during his frequent visits to Oklahoma. “My state legislative director can’t find a place in the state I haven’t flown to,” he laughed.

Inhofe was instrumental in efforts to establish the 18-year statute of repose as a means of limiting the liability of aircraft manufacturers. He also recalled his three-year struggle to pass what’s been called the “Hoover bill,” named for famed pilot Bob Hoover. The bill gives pilots a means of appealing an emergency revocation of their airman certificate. “At that time there were so few people who had an understanding or appreciation for aviation,” he said. “I learned the hard way how hard it is.”

He is pleased that the leaders of the Senate’s GA Caucus aren’t long-time pilots. “This broadens the appeal,” he said. He encourages other senators to attend aviation events like EAA AirVenture in Oshkosh. Inhofe’s objective is to get other members of the Senate to learn more about general aviation. “A lot of people don’t understand general aviation,” he said. “They think if you own an aircraft you’re a fat cat, and you don’t want to be taxed.”