Get the app Get the app
AOPA will be closed July 4th, in observance of the Independence Day holiday. We will reopen at 8:30 am ET on Tuesday, July 5.
News & Media Live in the sky

Live in the sky 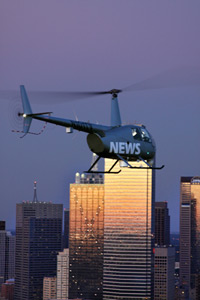 Markets change. Take the music industry, for example. First it was vinyl records, then cassette tapes, and eventually compact discs. It all changed again with the Internet and MP3 players. Technology transforms markets by making products better, smaller, and less expensive. Innovative companies understand this and find success by pioneering these changes.

The technology-intensive airborne electronic news gathering (ENG) market is no exception. And as is typical in such dynamic technology segments, the innovation is being led by entrepreneurs. In the case of ENG, among those entrepreneurs are Ken and Connie Pyatt of Dallas-based SKY Helicopters.

Not long ago, many of the TV stations in larger markets were operating turbine helicopters such as the Eurocopter AS350 and Bell 206. Large gyrostabilized cameras, microwave gear, and recording decks were heavy, requiring helicopters with greater payload capability. When Robinson Helicopter Company introduced the R44 Newscopter in 1997, it was marketed to smaller stations as a cost-effective aerial news platform. It carried the basic gear but lacked a high-definition (HD) camera, so penetrating the larger markets proved difficult.

Moreover, Robinson had a difficult time finding equipment that fit or worked properly in the R44 Newscopter and in many cases had to modify or repackage ENG equipment. As technology advanced, companies such as Broadcast Microwave Services Inc., Nucomm, and Link/MRC designed and built smaller, lighter HD transmitters, receivers, and other ENG equipment particularly suited for the compact R44 Newscopter. The world’s appetite for HD video was growing, and Robinson responded with an HD version in 2008. This latest iteration has evolved into an established broadcasting platform.

As cutting edge as the new system is, it would seem the company’s timing wasn’t great for introducing an upgrade. The economic downturn had started to sink its teeth into the world markets. The helicopter industry was not spared as operators’ revenue started falling, making new helicopter purchases hard to justify. Manufacturers began reporting cancelled orders, including Robinson. Survival mode had quickly become the most popular buzzwords in the helicopter industry. This was especially true with airborne electronic news gathering. Ad revenue dropped considerably and TV stations responded by cutting back their flying hours or eliminating helicopters altogether.

The sluggish economy was felt in Dallas/Fort Worth, the fifth-largest television market in the country. At one time each of the four major TV networks there operated its own turbine-powered helicopter. When a helicopter was down for maintenance or out of service, they relied on SKY Helicopters for backup. Based just northeast of Dallas at the Garland, Texas, Heliport, SKY is a small GA helicopter company that operates R44 Newscopters in several smaller markets. Founded in 1992 by the Pyatts, SKY has become an authority in the R44 Newscopter business. 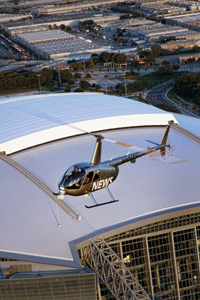 In September 2009 SKY was named the forty-first fastest-growing privately held company in the Dallas/Fort Worth/Arlington metro area by Inc. magazine. The company is no stranger to this award as it has been named to the Inc. 500 three times in the last 10 years.

In addition to the TV news business, the Pyatts run a successful flight school and manage the Garland/DFW Heloplex heliport by concentrating on efficient business practices, controlled growth, and providing value to their customers. According to Ken Pyatt, the R44 Newscopter fits in perfectly. It has been a cost-effective solution since it was introduced in June 1997. Extremely reliable, it will routinely operate for 100 hours between inspections. It has a cruise speed up to 130 mph and can stay airborne for three hours on a full tank of fuel. The Raven II has enhancements such as hydraulically boosted controls, and aerodynamic blade tips that contribute to its very low noise level. However, Pyatt knew that the lack of a high-definition camera was holding it back in many major markets. When Robinson introduced the HD Newscopter, he bought the first one and started promoting it.

Nevertheless, even with the HD upgrade, gaining acceptance in the Dallas/Fort Worth market was difficult. For example, a general manager from one of the major network stations had been told that Pyatt was wrong—the R44 did not have HD capability. Fortunately, this manager stopped by the heliport one day and asked to see the helicopter. Pyatt took him into the hangar where the R44 was parked and the manager recognized the HD equipment right away.

Just as the Dallas/Fort Worth TV stations were starting to think about the new HD R44, however, the economy started slowing down. With ad revenues dropping sharply, the TV stations wanted to continue providing aerial images—the problem was justifying the high cost of operating a helicopter. By this point, many of the stations across the country had eliminated their helicopters.

The Pyatts are known in the local area as innovative business partners, and they had the solution. They decided to ramp up their involvement in the broadcast business. Despite the economy, for SKY a perfect storm of opportunity had arrived.

Their plan involved building a high-tech aerial video company that would contract to all the Dallas/Fort Worth TV stations. SKY helicopters would provide them with the same high-quality images and fast response time they had enjoyed by operating their own helicopters, only at a fraction of the cost. They had the right helicopter but Ken Pyatt needed to solve some logistical issues to ensure pilot availability and proper experience levels.

His solution was to take his full-time flight instructors and rotate them through the ENG side of the business. The challenge was to ensure that his pilots would have the skills to be successful in the nation’s fifth-largest news market. Encompassing nearly 10,000 square miles, the Dallas/Fort Worth area is the largest metropolitan area in Texas, home to almost 7 million people. 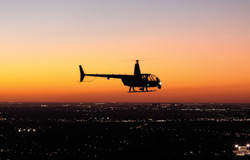 The first thing Pyatt has new pilots do is fly a series of increasingly difficult still-photography assignments. “It’s an excellent environment where they fly to multiple sites over a very large area,” Pyatt said. Senior staff scrutinize preflights and each mission is debriefed with the photo customers, some of whom have been flying with SKY for 15 or 18 years and understand the airspace limitations that the pilot must work with.

Once the new pilot gets comfortable with moving quickly in and out of congested airspace, while simultaneously ensuring the best photo angles, they are assigned what Pyatt calls “The Monster.” It is a 147-photo-target job that weaves in and out of two class B airspaces, 12 towered airports, 10 nontowered airports, and a couple of regional approach areas. The photo pilot plans for two fuel stops and about seven hours of flying. If he or she can successfully navigate the airspace and find all the photo sites, then Pyatt is pretty comfortable that the pilot will be able to handle TV news flying.

After that, the prospective news pilot heads back to the classroom for ground instruction on how all the news gear in the helicopter works. They learn what interaction is necessary between the camera operator and pilot, and what the TV station needs in terms of lighting, camera angle, and story information. Pyatt then puts the new pilot with his most senior pilots and they go out for some dual instruction and on-the-job training.

Finally, pilots spend a few days at one of the TV stations learning how the assignment desk works, how microwave signals are received and routed, and what the producers and editors need to have from the helicopter. Additionally, they get to put faces to the voices on the other end of the radio. Seeing how it all works helps pilots understand how to provide the best service while safely doing their jobs.

SKY has three full-time and two part-time instructor/news pilots. Two of the full-time pilots, Heidi Edstrom and Caleb Gidcumb, split their days covering news, working with students, or doing other commercial flights. They both agree that the job gives them a lot of variety and sure beats traditional instruction. Although they say that one day they would like to fly larger helicopters, what they do now feels like a career as opposed to a stepping-stone to something else. Part-time pilots Stuart Burris and Pyatt himself fill in when needed.

The third full-timer is Chief Pilot Jon Paul Leger, simply known as “J.P.,” who started with SKY Helicopters 10 years ago as a student pilot after a four-year stint in the U.S. Navy. After achieving his instrument CFI he continued to teach at SKY and received his ATP. He left for a few years to work offshore in the Gulf of Mexico and as an emergency medical services pilot in North Texas. Now an FAA designated pilot examiner, Leger is SKY Helicopter’s Part 135 chief pilot and director of training. His days consist of flying, grooming current and future news pilots, working with flight instructors, and the obligatory paperwork that goes with a management position. 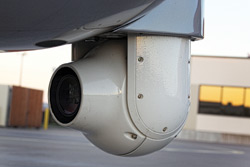 Pyatt hired Mike Warner and Ames Meyer as dedicated camera operators to complete the team. The pilots and camera operator have a ready room with TVs monitoring the four major stations, complete video editing capability, and two high-speed Internet lines for sending files. They monitor police, fire, and emergency radios, and normally learn at the same time as the stations’ news desks when news breaks.

The helicopter’s preflight is completed at the beginning of the pilot’s shift, so when the call comes to launch, it is airborne and heading to the scene in a matter of minutes. Once overhead, the crew begins simultaneously recording and transmitting live images directly back to the stations. Although each station receives the same live feed, they normally extract only a few seconds from several minutes of good video. This gives each station the ability to use different shots and angles from competitors. When the story is done the helicopter returns to the heliport and the HD images are posted on SKY’s secure Web site within minutes, for further use by the TV stations’ editors.

To complete his concept of providing cost-effective, high-quality video services Pyatt formed Video Pool Network. For growth he is looking at different regions because his model is reproducible in other markets. In January 2010 SKY took delivery of another R44 Newscopter—the sixtieth Newscopter model produced by Robinson. And if the demand is there, Pyatt plans to add on-air talent.

He is already gearing up for the next wave of change coming to the ENG business. Technology will drive components smaller and connections faster. He envisions a day when his newscopters can roam the country for a story, shoot the images, edit on a laptop in the helicopter, and e-mail the finished package anywhere. If he’s right, SKY Helicopters and VPN could become the Associated Press of airborne video.