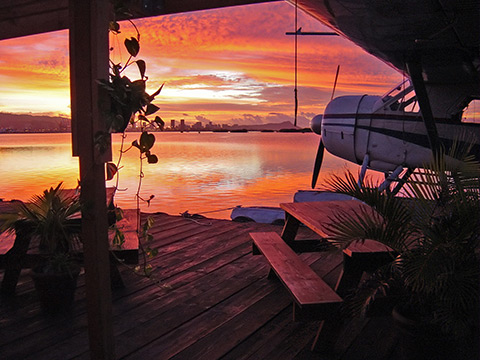 Pat Magie (pronounced “muh gee”) and his wife Debbie are living their dreams--the ones the rest of us talk about whenever we get in a run-away-and-join-the-circus mood. First the dream was to fly, so he bought a Piper J4 Cub for $850, put $950 floats on it, and paid a mechanic $350 to attach them. Then he learned to fly.

Now he has 39,100 accident-free hours. That’s 32,000 on floats, 5,500 on skis, and only 1,600 on wheels. He doesn’t like airports much. If you attend one of Jimmy Buffett’s concerts this year, you’re going to see a huge picture of one of Magie’s airplanes. The two have flown together at Magie’s Island Seaplane Service across the harbor from Honolulu. 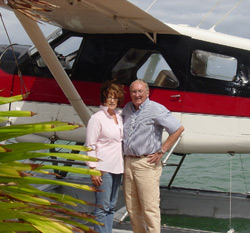 Hawaii is just another stop on Magie’s list of dreams. First, he was an independent operator and aircraft dealer in northern Minnesota. His business was written up in the September 1968 AOPA Pilot. Then he was a bush pilot in Cordoba, Alaska, delivering fuel, flying fishermen and sightseers around, and transporting campers. When he tired of that he sold the business to his daughter. “I can’t stay in one place too long,” he admits.

The next dream was Hawaii, where it took him eight years to get his seaplane sightseeing business going. His location was a base for five Martin Mars flying boats that flew from Hawaii to Alameda, Calif., during the war and for several years after. His business is based on a floating office.

At first he leased a home, but traffic was a mess and then the home was sold. So he moved to the boat until he and Debbie could find something, but they liked living on the office boat and never moved. It bobs a little during a storm, but breakfast, dinner, and the whole workday are quite scenic. He operates a de Havilland DHC–2 Beaver and a Cessna 206 on floats.

He leases out a wedding chapel next to his office-boat-seaplane-dock to a Japanese company, but zoning rules are tough and must not be ignored. The couples are not allowed to pay for a wedding, so the bride and the groom are each charged the cost of a seaplane ride. There have been 669 weddings, but only five couples took the scenic flight afterward. 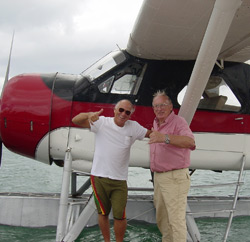 Magie has flown with singer Jimmy Buffett at Magie’s Island Seaplane Service across the harbor from Honolulu.

Are we getting this 80-year-old in trouble by reporting that? Not likely. Everybody knows what’s going on, and he is selling his business soon. He lost his medical, but it was another opportunity, another dream. He’s going back to Alaska with Debbie to open a fishing camp. Debbie will be the pilot this time, as soon as she learns to fly. The Island Seaplane Service is for sale at $2 million, debt free. The couple is justly proud of that, especially in a recession.

Aviation is a family affair for Magie. “His father's first license was number 8 and was signed by both Orville and Wilbur Wright,” Debbie said. “He [the father] knew both Lindbergh and Earhart. Pat’s two sons fly and also our two son-in-laws.”