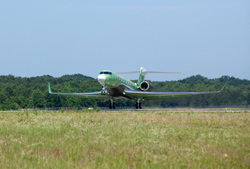 Gulfstream announced that a third G650 has joined that airplane’s flight test program and has already accumulated 10 hours of testing. The airplane will be used to determine aerodynamic loads, test the G650’s ice protection system, and serve as a testbed for a new version of the company’s PlaneView avionics suite.

Pres Henne, Gulfstream’s senior vice president of programs, engineering, and test said, “The addition of the third test aircraft to the fleet means the test pace is picking up, with development and certification flight activities quickly advancing.”

So far in the test program, 1,800 hours have been flown. And on May 2, the G650 reached a significant milestone when it achieved its maximum operational Mach number—Mach 0.925. The speed was obtained at 42,500 feet. Earlier this year, a G650 was flown at its maximum takeoff weight of 99,600 pounds.

Gulfstream says that the G650 will offer the longest range at the fastest speed in its class and be capable of flying 7,000 nautical miles at Mach 0.85.

Gulfstream says that the G650 will earn certification in 2011, with deliveries following in 2012.