Get the app Get the app
Already a member? Please login below for an enhanced experience. Not a member? Join today
News & Media G250 bizjet on schedule

The Gulfstream G250 super midsize business jet is on track for an April 2011 certification with deliveries in the fourth quarter of next year, but many challenges remain for the program.

Ronen Shapira, chief test pilot for Israel Aerospace Industries, provided an exclusive briefing on the G250 project for delegates to the World Assembly of the International Council of Aircraft Owner and Pilot Associations (IAOPA). The IAOPA group is holding its biennial gathering in Tel Aviv, home to IAI. The Israeli manufacturer builds the G150 and now the G250 under a partnership with U.S.-based Gulfstream Aerospace. 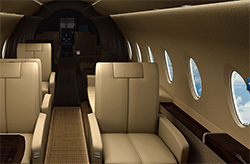 The new model had its first flight on Dec. 11, 2009, four years after the upgrade to the G200 was announced. Originally known as the Galaxy until Gulfstream acquired the rights to the design about a decade ago, the G200 was certified in the early 2000s.

The G250 uses the same fuselage as the G200, but it is able to utilize three more feet of cabin space by removing the aft fuselage fuel tank, storing all of the fuel instead in the wings (the wing uses the high-speed, low-drag technology from the G500 series). The move not only allows for a larger cabin, but allows access to the baggage compartment in flight.

With new Honeywell HTF 7250G engines, the G250 will cruise at Mach 0.80, besting the G200’s Mach 0.75; the G250’s Mmo rises to Mach 0.85. The new design features auto throttles, brake by wire, and autobraking as well as the new Collins PlaneView 250 flight deck. Enhanced and synthetic vision will be available.

Two more aircraft will join the test flight fleet, according to Shapira. While the impressive first flight lasted three hours and 21 minutes and climbed all the way to 32,000 feet while stretching the speed envelope to Mach 0.75, the project has many milestones to cover before certification next April. If the April 1 deadline is not met, Gulfstream has the right to reopen negotiations on the project, Shapira said. The chief test pilot said the test airplane is performing well and indicated that the wing is providing better lift and stall margins than expected, all of which may mean the possibility of greater range than the planned 3,400 nautical miles.