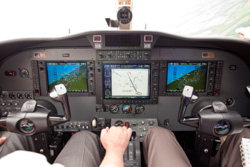 Garmin International, ever on the march in the turbine market, has introduced a G1000 retrofit for early model Cessna CJ light jets. The CJ, built between 1993 and 2000, racked up some 359 sales and most came equipped with Honeywell’s Bendix/King EFIS 40/50 ADI and EHSI package, a Universal UNS-1M flight management system, and a Honeywell SPZ 5000 autopilot. Those avionics became rapidly dated, along with the analog vertical-tape engine gauges and other panel equipment.

Seeing a niche, Garmin is working on an STC to install its G1000 avionics suite in CJs. Flight testing is almost complete, and certification should be earned by the end of June. The modification does away with the standard-issue hodgepodge and replaces it with a three-screen G1000 and a glareshield-mounted GFC700 autopilot and integrated flight control system. Garmin claims a weight savings of approximately 100 pounds.

The G1000 mod brings the CJ into the modern era. The WAAS-capable system allows more precise RNAV GPS approaches, including vertical guidance to lower landing minima in localizer performance with vertical guidance (LPV) approaches, a Class B terrain awareness and warning system (TAWS), and Garmin’s SafeTaxi geo-referenced electronic airport diagrams. Electronic approach, departure, and STAR charts are also standard equipment, and are provided by Garmin’s FliteCharts. Garmin’s GDL 69A datalink receiver and XM WX Satellite Weather are also standard. None of these features were available when the CJ was certified.

The G1000 mod also generates target N 1 settings for takeoff and go-around, as well as climb power. Garmin points out that in the rare case of a dual-generator failure, a G1000-equipped CJ will still have the pilot’s primary flight display, plus air data, standby instruments, and one of the airplane’s two attitude and heading reference systems (AHRS) on line; with the standard CJ panel, you’d be down to “steam gauges” for flight information, and have a single VHF navcom. But either way, the clock will be running on the battery’s 30-minute endurance.

Finding service support for the CJ’s original equipment has become increasingly difficult, a Garmin spokesman said, so the G1000 retrofit makes sense in these airplanes, which now sell in the $1.5 to $2 million price range. Not to mention the added features. The retrofit is priced at $385,000 ($405,000, if synthetic vision is installed), will be carried out at Cessna service centers, and will require four weeks of down time.