Get the app Get the app
Already a member? Please login below for an enhanced experience. Not a member? Join today
News & Media Become a Pilot Family Day draws 10,000 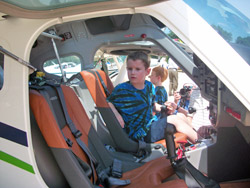 Airplanes, helicopters, antique cars, and beautiful weather made a winning combination at the sixth annual Become a Pilot Family Day on June 19 at the National Air and Space Museum’s Steven F. Udvar-Hazy Center.

At least 50 aircraft, including the 2010 AOPA Fun to Fly Sweepstakes Remos, were part of a static display outside the museum, which is adjacent to Washington Dulles International Airport. Participating aircraft flew in to Washington Dulles—a busy airport in Class B airspace with numerous international flights—guided by air traffic and ground controllers who shepherded them along nearly six miles of airport pavement to Udvar-Hazy.

Some 10,000 people visited the museum on Saturday, according to NASM estimates. In addition to touring the facility, which houses thousands of aviation and space artifacts, visitors participated in book signings, operated flight simulators, watched demonstrations of radio-controlled aircraft, and met members of the Tuskegee Airmen East Coast Chapter. AOPA sponsored the Become a Pilot Day certificate program, which noted the activities that each child completed during the day. Those who completed enough activities were considered a pilot for the day.

Easily the largest aircraft on display was a massive U.S. Air Force C-17 Globemaster. Joining the C-17 were several helicopters, and the U.S. Army inflated a hot air balloon briefly until gusty winds forced the crew to deflate it. Gliders and a rotorcraft were positioned nearby.

General aviation was well represented with aircraft of all flavors, ranging from a Cessna 170B, a Cessna 182, a Cirrus SR22, a Columbia 400, and two RV4s as well as a Stearman and a Waco from the Flying Circus Aerodrome in nearby Bealeton, Va.

Children and families eagerly waited in line for a chance to see the Fun to Fly Remos and climb inside. Many pilots who stopped by recognized the airplane as “the one that raced the smartcar to Florida”—a reference to April’s Road and Runway Rally—while others asked, “Is this the same airplane that is being flown all around the country?”—a reference to Michael Combs and the Flight for the Human Spirit.

Margery Natalie, docent program manager at Udvar-Hazy, has coordinated the Become a Pilot Family Day since the first was held in 2004. Natalie and her husband, Ron, both AOPA members, own a Navion that they bring to the event each year. “As a pilot myself, the idea of a fly-in was a no-brainer,” Natalie said in a NASM blog, given the center’s proximity to IAD with plenty of room to tie down aircraft outside. She has recruited a small army of volunteers for the event, including people who marshal and park aircraft at EAA AirVenture as well as members of the Civil Air Patrol, Junior ROTC, and Boy Scouts.

See more images from the event at the NASM’s public photo stream on Flickr.