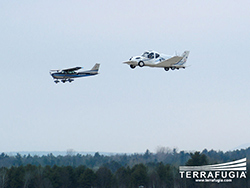 The FAA boosted hopes of Terrafugia officials to market a roadable light sport aircraft (LSA) by granting a large portion of the weight increase the company requested. The FAA said it would allow the vehicle to weigh 1,430 pounds, the same limit already allowed for LSA seaplanes. The company’s request to increase the weight from the LSA standard of 1,320 pounds to a higher 1,474 pounds was denied.

By granting the same weight limit as for LSA seaplanes, the FAA has acknowledged that the Terrafugia flying car is a different type of LSA. That acknowledgement could help the company with federal highway officials.

Still to come is approval from federal highway officials regarding non-waiverable highway crashworthiness standards. Without that, the vehicle can’t be marketed as a roadable vehicle. There is no timetable for a decision, but company officials are hoping to hear this year. Company officials feel the extra weight allowance by the FAA allows for the weight of the structure needed to meet highway safety standards, despite the FAA approval falling 44 pounds short of the request.

As it stands, the FAA weight exemption allows a payload of 310 to 330 pounds when carrying full fuel of 20 gallons. Owners may decide to fly partially fueled in order to carry a passenger. LSA aircraft are limited to two seats.

Terrafugia will unveil computer renderings of its production prototype design at EAA AirVenture July 26 at 10:30 a.m. at the Terrafugia exhibit. Initial deliveries of the Transition are expected at the end of 2011. The company has about 70 orders.