Get the app Get the app
AOPA will be closed July 4th, in observance of the Independence Day holiday. We will reopen at 8:30 am ET on Tuesday, July 5.
News & Media Air Race Classic pilots wing their way to Maryland 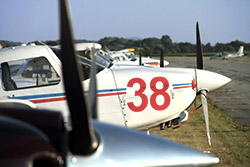 The all-women Air Race Classic started in Fort Myers, Fla., and ended in Frederick, Md., at the home airport of AOPA headquarters. Forty-seven teams arrived in Frederick before the 5 p.m. cutoff on Friday.

The thirty-fourth annual Air Race Classic concluded its cross-country race from Florida to Maryland on Friday, June 25, bringing more than 50 airplanes and more than 100 women pilots to Frederick Municipal Airport.

Florida pilots Terry Carbonell, Ellen Herr, and Laura Ying Gao won the 2,200-nautical-mile event, flying Carbonell’s Cessna 182RG. Their team was also the first airplane to arrive at Frederick Municipal on Friday, although that is not necessarily an indicator of performance. The airplanes are handicapped based on current, demonstrated, and best ground speed, and are basically racing to beat their own times.

Joyce Wilson and Laura Berry won second place in a Cessna 182S, and in third place were Linda Street-Ely and Elizabeth Kummer in a Grumman Cheetah AA-5A.

The race kicked off on June 22, launching from Fort Myers, Fla., and concluding in Frederick, Md., with stops in Waycross, Ga.; Tuscaloosa, Ala.; Hot Springs, Ark.; Cameron, Mo.; Carbondale-Murphysboro, Ill.; Elkhart, Ind., and Parkersburg, W.Va. This year marked the first in which the event terminated in Maryland.

First-time racers Heather Woiciechowski and Sandi Terkelsen, flying Woiciechowski’s Piper Cherokee, were the last team to arrive before the 5 p.m. cutoff on Friday. As they taxied off Runway 23 to join the other airplanes tied down along the ramp, they were greeted by a group of more than a dozen AOPA employees who came out with signs to show their support. Terkelsen is director of donor development for the AOPA Foundation. 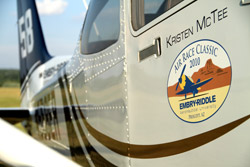 This year’s race falls in the centennial of licensed women pilots and includes pilots ranging from college students to grandmothers.

“Thank God, it’s nice to be here!” Terkelsen exclaimed as she emerged from the airplane to cheers and hugs from her colleagues. Woiciechowski gave the airplane a pat as she got out. The team had been delayed in Waycross for a day when a leaky gasket needed repair, and then had to divert around thunderstorms in Indiana. (Read about the team’s quest to pick up a new part in Terkelsen’s blog.) Even though it seemed unlikely that they would place, they said they were happy to be able to complete the race without being disqualified. Final standings indicated that, in spite of their run of bad luck, they managed not to finish last.

The race ended Friday, but ARC participants and local pilots were treated to a weekend full of festivities. At a “meltdown” hangar party that evening, the ARC pilots traded war stories and discussed their chances for a trophy and a cash prize. On Saturday, they returned to Frederick Municipal to participate in an open house where more than a dozen airplanes were on display, and on Sunday standings were announced and prizes distributed at a banquet sponsored by AOPA.

On Saturday evening, director Heather Taylor screened her documentary, “Breaking Through the Clouds,” a chronicle of the 1929 Women’s Transcontinental Air Race. The 20 pilots in that historical event included Pancho Barnes, Amelia Earhart, Phoebe Omlie, and Louise Thaden. “Breaking Through the Clouds” included newsreel footage from the 1929 event, interviews with at least two of the surviving racers, and air-to-air footage with historically accurate aircraft. Taylor hopes to screen the film at this year’s EAA AirVenture and will continue with her plans to self-distribute it.