Get the app Get the app
AOPA will be closed July 4th, in observance of the Independence Day holiday. We will reopen at 8:30 am ET on Tuesday, July 5.
News & Media &lsquo;Flying car&rsquo; intended for Amazon use 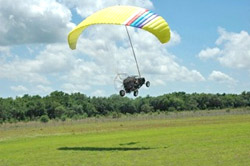 There are already more than 100 light sport aircraft you can buy, and now there is soon to be a new one, the I-TEC Maverick Sport Model. It isn’t exactly a flying car, more like a powered car-a-chute. It was developed for use by missionaries in remote areas of the Amazon to use roads—as far as they go—and to fly the rest of the way over the jungle canopy to indigenous people.

The Maverick is the result of seven years of research and development by the Indigenous People's Technology and Education Center (I-TEC). I-TEC founder Stephen Saint grew up among the Waodani Indians of the Amazon, and the vision for the nonprofit organization grew out of his experience among the people. The primary objective for the flying car is humanitarian use in frontier areas of the world. Developing a commercial market is meant to help reduce the cost for frontier use.

“The Maverick Sport is a dream boat,” said Troy Townsend, I-TEC chief operating officer and test pilot for the Maverick. “It’s easier to fly than a regular powered parachute.” Townsend should know; the instrument-rated private pilot is also a sport pilot instructor who has been flying powered parachutes for more than 12 years.

It takes five minutes to transition from car to powered parachute and vice versa. The aircraft requires a 250-foot takeoff roll, can climb at 500 feet per minute, and soars through the sky at 40 mph. It’s weight comes in right at the 1,320-lb. limit for LSA standards.

“The Maverick Sport is different from current production S-LSA powered parachutes in that the pilot does not have to kite the chute from the ground,” Townsend explained. “Instead, a proprietary mast and spar system is used, making takeoffs, landings and crosswinds much more predictable.”

Flight is much different as well. The craft is operated in the air the same way it is on the ground—with a steering wheel and gas pedal. 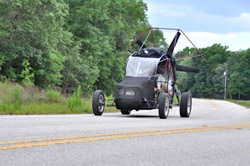 “When I’m flying, I have to remind myself that I’m in the air,” Townsend said, “because I feel like I’m in a car.”

According to Townsend, the Maverick Sport received its Florida Department of Motor Vehicle license June 29 and is road legal. The car can maintain interstate speeds, has a robust suspension, and is float capable. It has a dual drive system that fits a transaxle or drives a propeller.

Saint’s father Nate served as the pilot for a group of missionaries who made early contact with the Waodani in the 1950s and were killed. Despite the missionaries’ deaths, the Saint family and others continued to work to establish friendly relations with the Waodani. Rachel Saint, Nate’s sister, served the Waodani until her death in 1994.

Following in his father’s footsteps, Saint graduated from Wheaton College and has launched several successful businesses and has worked as a missionary in West Africa, Central America, and South America. At the request of the Waodani elders, he returned to the Amazon in 1995 along with his family. Since then, some Waodani have learned to fly powered parachutes.