Get the app Get the app
AOPA will be closing at 2 pm ET on Friday, July 1, in observance of the Independence Day holiday. We will reopen at 8:30 am ET on Tuesday, July 5.
News & Media Winston Churchill, pilot, dies of cancer 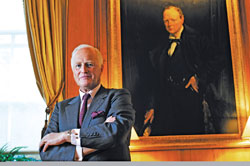 Winston Churchill, grandson of the famous British leader during World War II and a lifelong pilot, died at his home in London. He had prostate cancer.

Churchill’s life as an aviation enthusiast and civilian pilot was documented in an AOPA Pilot article last year. Churchill was a member of the House of Commons and a graduate of Oxford, but he spent a great deal of time in the United States as well. He was living in Florida when interviewed by AOPA Pilot. A journalist, his first unpaid job was at the Wall Street Journal, according to a report in the Washington Post.

Some of his fondest aviation memories involved midnight flights to transport medical patients around Europe free of charge. He was a recipient of such flights last year when he needed transportation for cancer treatments. He was the son of Randolph Churchill and Pamela Digby, later known as Pamela Harriman, U.S. ambassador to France.