Get the app Get the app
AOPA will be closed July 4th, in observance of the Independence Day holiday. We will reopen at 8:30 am ET on Tuesday, July 5.
News & Media Record-setting pilot receives additional honors 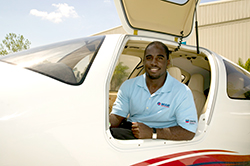 Barrington Irving, who in 2007 became the first African-American to fly around the world, received additional recognition of his achievements in February, which is designated Black History Month.

Irving was among 100 honorees in “The Grio’s 100: History Makers in the Making,” a compilation of the next generation of African-American history makers and industry leaders. Essence magazine featured Irving in its “Black History Now: 40 Firsts in 40 Years” list, along with President Barack Obama and first lady Michelle Obama; Colin Powell; and Mae Jemison, a crew member of the space shuttle Endeavour and the first female African-American astronaut in space. Finally, BET named Irving as one of its 15 rising stars of 2010.