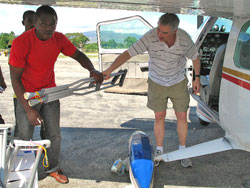 At the end of the day, Pelletier, second from left, talks with other pilots on the ramp at Jacmel, Haiti.

A Pennsylvania pilot who recently returned from a week of flying relief missions in Haiti with his Cessna 177B Cardinal says that general aviation relief flights to the earthquake-ravaged nation are winding down because of changes in how the country’s airports are being operated.

“Bahamas Habitat closed down, more or less, its Haiti relief operations this past Sunday,” Dennis Pelletier said March 10. Bahamas Habitat has been one of the largest coordinators of general aviation relief flights into Haiti; the other is G.O. Ministries.

Pelletier said that G.O. Ministries is the only organization he knows that is still coordinating flights into Haiti. “I doubt seriously because of the change in the political climate that they’ll be flying much past this weekend. It’s unfortunate, because the need’s still there, especially out in the country.”

During the early recovery period, Pelletier said Haiti’s smaller airfields were operated as international airports—which meant pilots did not have to clear customs at Port-au-Prince or Cap-Haitien and then fly to the outlying airfields, which adds time and incurs additional landing fees. However, the airports are now returning to normal operations, requiring entry through one of the two international airports.

Flights in flux; call before you go

The changing situation in Haiti may make it more difficult to fly your own aircraft down to help, and pilots should contact a coordinating organization before departing for the island. Bahamas Habitat suspended its flights to Haiti on March 7, and is “reassessing a longer-term solution,” said Steve Merritt; updated information will be posted online G.O. Ministries was planning to end flights to Jacmel, which has been operating as an international airport, when Canadian military personnel there leave March 14 and it reverts to domestic status—but the organization is looking at a shift to other airports. And there are other ways for pilots to contribute to the ongoing efforts. Michael Rettig of The Rettig Family Foundation said his organization has plenty of cargo and a steady stream of airplanes, but is looking for additional funds for fuel. Pilots can donate at the “Pilots for Haiti” Web site. Pilots also can consider contributing to a non-aviation-related relief organization.

“The underlying need of the people is different, but it’s just as great as it was right after the earthquake,” he said. Medical care and food are needed—and there are 1.3 million people in Haiti without homes. “Tents are probably the greatest need down there right now,” said Pelletier, who is collecting them in Pennsylvania. “We’ve collected over 1,000 tents here—we’re not sure how we’re going to get them down there.”

Pelletier recently returned from seven days of flying relief flights, primarily from Santo Domingo and Santiago, in the Dominican Republic, to Jacmel and other airports in rural areas of Haiti. Pelletier said a flight of an hour to an hour and a half took the place of 14 to 15 hours of overland travel.

He left for Haiti on Feb. 19, flying in support of Bahamas Habitat. “They rose to the occasion after the earthquake because they had a few pilots, and that bloomed into this heroic effort to move stuff down to Haiti,” he said. He arrived in Haiti Feb. 21 and realized that flying a smaller airplane like his fixed-gear Cardinal, he could be more productive flying three or four sorties a day from the Dominican Republic to Jacmel than the 500-mile leg from Nassau to Haiti.

The camaraderie was rewarding and helped the system to work, Pelletier said. “It’s just been a brotherhood of pilots. I’ve had a chance to meet quite a few of these guys. Some of them have been doing it for three or four weeks,” he explained. “You were briefed coming in by the pilots who were coming out. After a couple of days of flying, you had it all figured out. And when you left the country, you briefed the pilots who were coming in.”

He met a pilot with a Pilatus PC-12 who flew relief flights for two or three weeks; another flew his Mitsubishi Mu-2 there for a month. “I got to sit around the table with these guys over dinner, and they passed along to me what they did.” Hundreds of thousands of pounds of supplies were flown out of Santiago. “Now a Cessna 210 and a T-41 are the only two left.”

Pelletier often stayed in Jacmel. In the morning he would go to the airport, fly outbound medical volunteers about 150 miles to Santo Domingo or Santiago, and then haul food or other supplies back. “We’d generally do three or four sorties each day,” he said. Avgas often was not available in Haiti, but it was in the Dominican Republic. 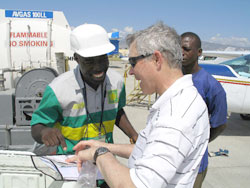 His most memorable experience resulted from a visit to the Baptist mission hospital in Jacmel. “That is where a lot of these teams of doctors were going. These guys were working nonstop—the needs were gigantic,” Pelletier said. “Everyplace I went, I asked people what they need—I knew that back in the Dominican Republic, I could get many of these things.” A doctor gave him a list of medicines critical to the hospital’s operations over the next month, and Pelletier gave it to G.O. Ministries’ staff in Santiago.

“They filled everything on that list. I had the privilege of being able to fly that 275-pound load of prescription drugs down to Jacmel, throw it on a truck, and personally deliver it to that doctor. The guy was almost in tears. The opportunity to fulfill that need, from one end of the pipeline to the other, and see that need fulfilled was probably the neatest thing I experienced.”

For more information on what it was like to participate in earthquake relief flights, see “Flying into Haiti” in the March 2010 issue of AOPA Pilot.