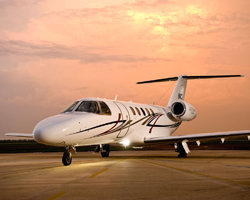 The $9 million, 453-knot, 2,002-nm twinjet is powered by Williams FJ44-4A engines rated at 3,621 lbs static thrust and has seats for eight passengers. The CJ4 is a follow-on design to the CJ3 business jet, and both are certifiable for single-pilot operations. The CJ4 is the biggest CJ in the fleet—with a cabin that is 17 feet long, two feet longer than the CJ3’s. It also has two-zone environmental control system, which lets pilots and passengers select their own, independent temperature levels.

First deliveries of the CJ4 are set to begin later this year.