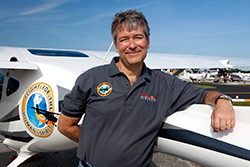 Michael Combs leans on the Hope One - the Remos LSA he will fly to all 50 states.

About two weeks before he departs on a 50-state trip in a light sport aircraft, Michael Combs is consumed by details: a final inspection of the Remos GX he will fly; sponsor decals to attach to the airplane; last-minute adjustments to his itinerary. And yet, he’s taking it all in stride.

“I’ve been planning this trip for a year and a half,” he said. “Although I don’t know if you can ever be completely ready for a trip of this magnitude, I’m going to take to the skies and see how many lives we can touch through this flight.”

If the weather cooperates, Combs will launch Monday, April 5, from Salina, Kan., on what he has dubbed The Flight for the Human Spirit (see the complete report in the March 2010 AOPA Pilot). He’ll stop at 135 cities or towns in the next few months, traveling some 19,400 miles on a journey projected to last two or three months. His mission is to tell everyone he encounters that it is never too late to follow your dreams.

Combs took time out from his preparations to offer some words of advice to AOPA’s Alyssa J. Miller, who will be flying the Fun to Fly Sweepstakes Remos in the association’s upcoming Road and Runway Rally on April 10. Miller, who’s had little exposure to glass cockpits, wondered in a blog how best to get acclimated to the Dynon display in the Remos, which is the same model as the one that Combs flies. “Don’t bother to split the screens, instead just scroll through and get used to the different combinations that each one gives you. That way you’ll be familiar with the options as you are flying, and will be able to anticipate what the next option will be,” he said.

You can view Combs’ route on his Web site. When he launches, you’ll be able to follow him via a live tracking map on AOPA Online, as well as through Facebook and Twitter.

Pilots are encouraged to meet Combs at the airports along his route. Since learning of his plans, many have reached out to him with offers ranging from food, shelter, and hangar space for the Remos to a session with a weather consultant.