Get the app Get the app
AOPA will be closed July 4th, in observance of the Independence Day holiday. We will reopen at 8:30 am ET on Tuesday, July 5.
News & Media Youth travels out of state to solo on birthday

Youth travels out of state to solo on birthday 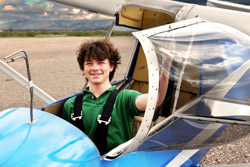 Cormac Siegfried wanted to solo a glider on his fourteenth birthday; after all, his sister did. So did his father. But the weather in Palo Alto, Calif., wouldn’t cooperate.

So, father Rand Siegfried, a pilot and flight instructor, moved the training operation to Pleasant Valley Airport in Peoria, Ariz., where it was chilly and cloudy, but flyable. The family jumped into the Twin Beech to support the effort, including his mother, Andrea Cunningham, and sister, McKinley. Meeting him there was his grandfather, retired United Airlines pilot Bob Siegfried who originated the family tradition, and grandmother Thelma, plus cousin Rick Siegfried.

Father and son made 20 flights in the two days preceding March 8, Cormac’s birthday, and on the big day itself, Cormac soloed five times.

“Cormac came through with flying colors,” said his father. “He did such a great job. He is an excellent pilot.” Cormac is the youngest of Bob’s grandchildren and the last to complete this rite of passage.

A cold and cloudy day, even for Peoria, Ariz., made for a chilly flight, but when Cormac landed after the first of five solo flights he could not stop smiling and said, “I want to go up again! Higher!” Sounds like someone who is headed for a career in flying.