Get the app Get the app
Already a member? Please login below for an enhanced experience. Not a member? Join today
News & Media Virgin Galactic rocket ship completed 'captive carry' 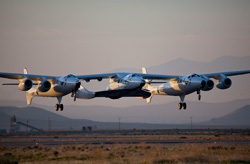 Follow-on flights in 2010 and 2011 will include gliding flights back to earth after VSS Enterprise is released, and test flights using the hybrid rocket motor. The ultimate goal is to prove the safety of the craft, clearing the way for passenger flights. The aircraft and spacecraft were built by Scaled Composites.

The company describes the rocket ship this way: “SpaceShipTwo [christened VSS Enterprise] uses all the same basic technology, carbon composite construction and design as SpaceShipOne. However, it is around twice as large as that vehicle and will carry six passengers and two pilots. It is 60 feet long with a 90-inch-diameter cabin, similar in size to a Falcon 900 executive jet, albeit with no floor dissecting the cabin and allowing maximum room for the astronauts to float in zero gravity. Each passenger gets the same seating position with two large windows … one side window and one overhead, so that, if you don’t want to float free in space, and you’d rather just remain in your seat, you still get a great chance to see the view. No more squabbling over who has the best seat.”