Get the app Get the app
Already a member? Please login below for an enhanced experience. Not a member? Join today
News & Media Airshow star Greg Poe helping kids 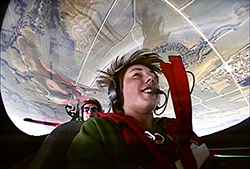 Matt, a Tucson student, goes inverted during the aerobatic ride he won for writing the best essay.

Greg Poe is using his position as an airshow star, and a personal tragedy in 2002, to help kids stay off drugs. At the same time, he is introducing youngsters to aviation.

As a result of the drug-related death of his son, Ryan, in 2002, Poe started the Ryan J. Poe Foundation. The foundation supports his Elevate Your Life Program under which he talks to school children in the areas where he performs. The program kicked off in Tucson recently with the first presentation. Winners of an essay contest were given a ride in Poe’s airshow aircraft. The goal is to make presentations to 10,000 kids and offer scholarships in the future to Space Camp or to an aeronautical school.

Poe’s presentation uses his own example of hard work and accomplishment when talking with middle-school-aged children all over North America. It resulted from the loss of his son Ryan to heroin addiction in August 2002. Poe and his team are scheduled at 24 airshows this year, with one to two Elevate Your Life presentations planned at each stop. The Ryan J. Poe Foundation is a 501(c)3 charitable organization.

“We have a goal to reach out and present to over 10,000 kids this year during the 2010 airshow season,” said Poe. “Our program is designed to help kids reach their dreams and see the potential in themselves, and hopefully that awakened drive and passion helps keep them away from drugs and other bad influences that can wreck their futures.”

Poe discovered his passion for flying at an early age. He relentlessly pursued his dream with hard work and focused determination. Now, he is living his dream. He has been featured on “Modern Marvels,” “Ripley’s Believe It or Not,” the Discovery Channel, The History Channel, CNN, and others. For more information see his Web site and the Ryan J. Poe Foundation Web site.