Get the app Get the app
AOPA will be closing at 1:45pm ET on Tuesday, December 6th. We will reopen Wednesday morning at 8:30am ET.
AOPA Members DO more LEARN more SAVE more - Get MORE out of being a pilot - CLICK HERE
News & Media Adventure by Remos

A little airplane in a beautiful, out-of-the-way place

Seven- to 12-foot waves driven by a mid-March storm paused for just an instant above Black Sand Beach north of Shelter Cove, California, before thundering onto the rocky shore. Closer to town, waves exploded against craggy rocks in the town’s prized tidal pools, sending spray 30 feet high and leaving sea life behind to be enjoyed by visitors at low tide. 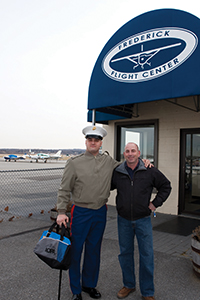 U.S. Marine Corps Sgt. Michael Blair is enthusiastic, does his homework, and seldom makes the same mistake twice—and he’s on his way to becoming a sport pilot in AOPA’s Fun-2-Fly Sweepstakes Remos GX.

“I’ve been curious about flying, and wanted to fly, for many years,” said Blair, 35, a married father of a 4-year-old daughter. “I even stopped by flight schools at a couple of airports to find out what it would take to learn to fly before I went to Iraq. But at the time I was getting ready to deploy and didn’t have the time to see it through.”

Blair fought in some of the fiercest battles in Iraq during two deployments in 2004 and 2006, and he was severely wounded by a roadside bomb. He has had scores of orthopedic surgeries on two reconstructed knees and resides in Silver Spring, Maryland, while undergoing physical therapy at Walter Reed Army Medical Center.

The facility is an hour’s drive from AOPA’s headquarters in Frederick, Maryland, and Blair has been making the commute several times a week to fly the Remos. Snow and high winds have grounded many of the planned flights during the harshest winter in decades, but Blair (nicknamed “Bulldog”) has passed the sport pilot knowledge test and soloed on March 26.

Unlike most GA flight students, who have to be coaxed and reassured before attempting potentially intimidating maneuvers such as stalls and steep turns, Blair’s instructors at AOPA (Dave Hirschman and Al Marsh) have sought to tone down Blair’s innate exuberance.

“The Remos is a very responsive airplane and light on the controls,” Hirschman said. “When it’s time to turn, Michael tends to lay it on its side. The Marines should have put him in a Harrier, says Hirschman.”

The full story of Michael Blair’s flight training will appear in a future issue of AOPA Pilot magazine.

Seven- to 12-foot waves driven by a mid-March storm paused for just an instant above Black Sand Beach north of Shelter Cove, California, before thundering onto the rocky shore.

Closer to town, waves exploded against craggy rocks in the town’s prized tidal pools, sending spray 30 feet high and leaving sea life behind to be enjoyed by visitors at low tide. In winter, the largest storms create waves that shake the ground and, on rare occasions, climb 20-foot banks, crossing yards, to spray the patio doors of shoreline homes. 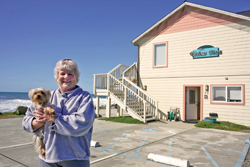 Julie Lane at her office at the The Tides Inn, the AOPA base of operations while at Shelter Cove.

U.S. 101 makes a straight shot from San Francisco to Eureka, bypassing all of the coast in between, helping to keep the Lost Coast area lost. Isolation has both helped and hindered Shelter Cove, located 24 miles of hairpin turns off U.S. 101.

There are no chain restaurants or hotels in the seaside community of 1,000, and that is a large part of its charm. The hotels carry names such as The Tides Inn of Shelter Cove and Inn of the Lost Coast, not Marriott. The pizza place is named Fish Tank Pizza instead of Domino’s, and the coffee shop is named Fish Tank Espresso Art Gallery, not Starbucks. Tommy York owns both; sister Shannah is known as “the crepe lady” at the coffee shop. No crepes are served for breakfast before Shannah arrives; she was sleeping in on March 14. It was her birthday, and Tommy took over her early shift as a birthday gift. She turned age—oops, better not go there. The coffee shop also serves lunch.

Isolation has protected the natural environment as well, except for decades ago when the area was farmed and loggers came for the redwood trees 20 miles away. Shelter Cove’s homes took over grazing lands, and conservation areas now defend watersheds and forests. Sinkyone Wilderness State Park occupies much of the coastline just south of Shelter Cove.

Isolation has hurt the area as well, keeping the visitor count lower than local businesses would like. Most of the visitors interviewed there in March had driven four to five hours to reach this vacation destination. But the community’s original developers in the 1960s knew the area’s shortcoming—and placed a runway in the center of the town.

I rented a Remos GX light sport aircraft for the 210-nm flight from San Francisco. The Remos cut the travel time in half, even with its climb propeller, which limited airspeed to 106 knots indicated at 5,500 rpm.

Shelter Cove (0Q5) has a 3,400-foot-long, 75-foot-wide runway with a separate taxiway and 20 parking spots. It is not attended and gas is not available. In summer there can be extended periods of fog lasting a day or two, so call your hotel before you fly, or check the Shelter Cove weather site. Click on “New Shelter Cove Weather Station.” It is not an aviation weather report but will tell you what is happening at the sewer plant where the sensors are located.

The Tides Inn of Shelter Cove is a 300-foot walk across the golf course from the approach end of Runway 30, and Inn of the Lost Coast is near the approach end of Runway 12. (A nine-hole golf course surrounds the runway and costs $10 per day.) Julie Lane, manager at The Tides Inn, loans her personal car to guests for short trips, and Mike Caldwell, owner of Inn of the Lost Coast, sometimes doubles as a van driver when he is not selling special-mission boats on the Web. Both hotels have reliable and fast Internet access. 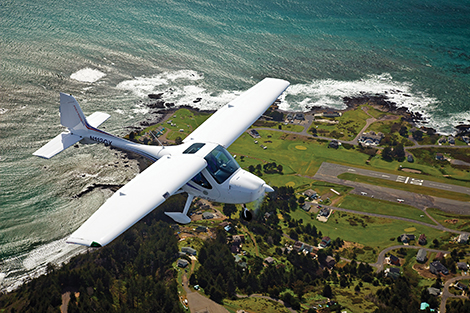 Friendly controllers allowed us to videotape above the Golden Gate Bridge on the way up. We heard other pilots on frequency touring San Francisco Bay.

Winter rain from a cold front had turned the rolling hills bright green. The mouth of the Russian River poured the heavy rains of the previous day into the Pacific Ocean. The front brought the clearest day Shelter Cove residents had seen all winter. Although temperatures were chilly, residents were out for the first bottom-fishing of the season. A Cessna Cardinal was already on the ramp when we landed, its occupants lured by
the good flying conditions and the golf course. The bull elk that infrequently visits the course has the right-of-way, so we gave him some room.

Parked next to the airport’s campground (at the Runway 30 approach end) was another Remos belonging to Tides Inn owner Brian Gaylord of Santa Clara, California. After purchasing the hotel, Gaylord made the five-hour drive only a few times before he decided not only to earn his sport pilot certificate, but to buy a Remos. The Cessna Cardinal, owned by a nine-person flying club, brought Gary and Linda Welch of Cloverdale, California, to Shelter Cove. Their first visit months earlier required a four-hour drive.

“After that first visit we promised ourselves we would be back, only next time we would arrive the proper way—in our airplane,” Gary said. “This time we were even more enthralled with the spectacular scenery. While on the downwind leg to Runway 30, Linda spotted a whale spout. We immediately exited the pattern and were rewarded with another spout. The giant tail flute seeming to wave at us as we flew overhead. 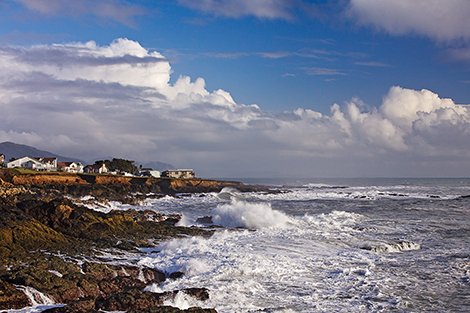 “Shelter Cove is truly the hidden jewel of California’s north coast and one of the most spectacular fly-in destinations in the state. While the locals are somewhat leery of tourists in general, they love pilots. You see, they know that pilots will come for a short stay, and then go home,” Welch joked.

Our choice for lunch was the Cape Mendocino Tea restaurant, and we were rewarded with—in my personal rating system—a five-star meal. Lyle Hill, who built the restaurant with his own hands and owns it with his wife, Marilyn, pointed out that my chicken pot pie was made with hormone-free chicken. The building is so solidly constructed that the crashing waves a few hundred feet away can’t be heard inside.

The Tides Inn is located 30 feet above the water, where the waves make just the right white noise for a good night’s sleep. If you need an additional pacifier, each room is provided with a rubber duckie in the bathtub.

Fifty feet from The Tides Inn is The Cove Restaurant, another five-star rating in my opinion. Tell owner Varina Kelly that AOPA Pilot sent you.

Walk another 50 feet and you’ll find the community’s lighthouse, where I met A.J. Machi. As it turned out, Machi is the nephew of Mario Machi, who is memorialized with a life-size statue nearby as the founder of Shelter Cove. A.J. descended wooden stairs near the lighthouse to spend some time with the waves. He said the waves are his therapy. He has lived in Shelter Cove since he was one month old, when there was only one dirt road that led to his house. “We were surprised when people came, and we wondered why they were there,” he joked.

When he was a child, his mother would ask him to catch a specific type of fish for dinner, and he knew exactly where on the beach to find it. When he and his friends heard an airplane approaching, they would dash to the runway to chase away the sheep. It was then a dirt runway stretching from the lighthouse to The Tides Inn.

He wades into neck-deep water for abalone that park their shells underwater in small rock caves along the shore. You never know what sort of sea life is hiding there, in addition to the abalone. Once he finds one, he uses a tool shaped like a crowbar to pry the abalone loose. A large one can cling to the rock with 2,000 pounds of force. “Don’t get your finger under there,” he said. 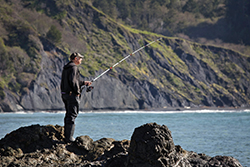 Bottom fishing begins May 15, and abalone season is April 1 to November 30, with a recess for the entire month of July.

This is a don’t-forget-your-camera place. Rock formations, wave action, mountains, tidal pools, sea lions, maybe some elk, and the redwoods 20 miles away offer unique opportunities for the enthusiast. Melinda Collins’ family took pictures of themselves near the huge waves on Black Sand Beach. As they left, climbing a hill above the beach, a huge wave slammed into the area where they had stood. “We turned around just in time to view a shocking sight of a rangy, mountainous blue wave moving towards a bed of black sand,” said Ashleigh Collins. Shelter Cove can and often does have dangerous rogue waves.

We circled Shelter Cove and Black Sand Beach, and then made a direct run for San Francisco’s Golden Gate Bridge—hoping to arrive before sunset. Controllers were once again very helpful. Light turbulence from the hills near the bridge bounced the formation, making it difficult for a frustrated photographer to get the shot. Until then the entire 200 miles had been steady and smooth.

After the photo shoot the adventure continued. We cruised across 30 miles of city lights to San Jose as the sky reached a deep purple. Which part of the trip was the adventure? All of it. My airplane may have been small, but the adventure was big.