Get the app Get the app
Already a member? Please login below for an enhanced experience. Not a member? Join today
News & Media Exclusive interview: General aviation&rsquo;s watchdog in Congress

Hearing legislators speak by sound bite on 24-hour news channels, it is easy to assume they are as devoid of in-depth knowledge on a particular subject as the news anchor himself. But spend time with congressional leaders and you quickly discover how passionate and knowledgeable they can be on key issues.

Hearing legislators speak by sound bite on 24-hour news channels, it is easy to assume they are as devoid of in-depth knowledge on a particular subject as the news anchor himself. But spend time with congressional leaders and you quickly discover how passionate and knowledgeable they can be on key issues.

A good example is Rep. Jerry Costello, a Democrat from an Illinois district just east of St. Louis. A member of Congress since 1988, he has been chairman of the aviation subcommittee for four years and is a senior Democrat on the Transportation and Infrastructure Committee. His command of aviation lingo and issues is so thorough that most people would be surprised to discover that he is not a pilot. His passion for things aviation was first sparked as a young man, when he experienced general aviation as a passenger in a Cessna flown by his brother.

Costello’s interest in aviation is partly fueled by his passion for economic development and job creation. Once arriving in Washington, he asked to be placed on the Transportation Committee and the aviation subcommittee. “I’ve always felt that in order to create and maintain jobs you have to get people from one place to another—and goods and products, as well,” Costello, 60, said during a recent exclusive interview with AOPA Pilot from his office in the Rayburn House Office Building, which has a commanding view of the U.S. Capitol dome.

Understanding the negative economic impact that would result from the aviation user fees proposed by the Bush and Obama administrations, Costello went on a campaign in 2009 to alert the president that such charges would be harmful to economic growth—particularly to aviation, which had been hard hit by the economic downturn.

“I wanted to send a message very clearly to them early on that if they sent a bill or budget from the president to the Congress, that we would in fact fight it very strenuously if they put in user fees for general aviation,” Costello said. Part of his campaign was drafting a letter to the president that 118 members of Congress ultimately signed; it stated clearly that the House would not consider user fees.

The letter proved a powerful weapon, causing the administration to remove any reference to user fees from its proposed 2011 budget. “I don’t believe that we need user fees,” Costello continued. “I’ve studied this issue and I think as long as we have a robust contribution from the general fund and, of course, the fuel tax that we have had…is sufficient. So there is no need to impose user fees. I’m pleased that this present administration got the message…and decided to drop the user-fee proposal from the budget.”

Costello supports the notion that a contribution from the general fund is an important part of aviation’s funding mechanism. As he notes, the entire economy benefits from a robust aviation infrastructure. “The contribution by general aviation and aviation in general to our economy, the number of jobs created and maintained in aviation, is more than enough justification to take money out of the general fund to support aviation. I expect that we will have a robust level of funding out of the general fund and it would be my intention…to make certain that that happens.”

So although user fees are seemingly not an issue in the short term, Costello is seasoned enough to know that nothing in Washington is permanent. Pilots, he said, must remain united against the fees, especially as legislators look for ways to pay down the climbing deficit. 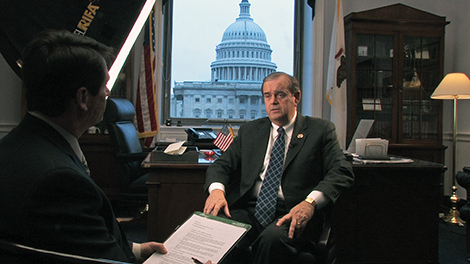 “I would say to pilots and to AOPA, which is one of the most effective organizations I have dealt with on Capitol Hill, that we have to be vigilant. We have to be certain…that we always send the message that user fees are not needed.” This is a bipartisan issue, he said, and everyone needs to stay united in driving the no-user-fee message home.

An important aviation initiative is the development of the next-generation air traffic control system, which has long been slowed by the budget debate. Costello believes NextGen can be funded with the existing funding mechanism of fuel taxes and general fund contributions. When Transportation Secretary Ray LaHood first took office, Costello met with him to urge progress on two issues—solving nagging labor issues with air traffic controllers and moving forward on NextGen.

“I don’t think there is any question that there is nothing more important from a safety standpoint and an efficiency standpoint for the future of aviation in the United States than we get rid of this ground-based radar system and go to a satellite system known as NextGen.” Costello is pleased with recent progress on NextGen development and complimented FAA Administrator Randy Babbitt on his leadership of the project.

As a watchdog in Congress for general aviation, Costello is aware of the various onerous security proposals that have been floated by the Transportation Security Administration. Calling some of the proposals “harebrained,” Costello said reasonableness should be the metric.

“We have to be reasonable about these things. There is no system that is without flaws or possibility of terrorist attacks. But we have to use common sense. We need to understand that the general aviation community are responsible citizens, they are taxpayers, they are people who abide by the law, and they will be the first ones to report anything that is suspicious. The last people we need to be concerned about, as far as security is concerned, is general aviation.” Costello reiterated that he is prepared to overturn any overly burdensome security measures that are implemented.

According to the chairman, ignorance of general aviation and its contributions to society is one of the reasons that the industry and its infrastructure needs are frequently criticized. Costello said President Barack Obama’s negative comments toward business aviation and the media’s attacks on funding for smaller airports show a lack of understanding about general aviation’s 220,000 airplanes, the jobs it creates, and the important network of smaller airports that are a transportation lifeline to rural communities.

“If you look at what it costs the taxpayers for general aviation airports, I think it is miniscule in the overall scheme of things. To our friends who may be critical of those airports, I think they need to spend a little bit of time talking to people who live in those communities, and they will find how important those general aviation airports are to the local people.”

Recognizing the dire financial situation of some aviation companies as a result of the economic downturn, Costello is open to ways to encourage investment that spurs new aircraft sales. However, he is not terribly hopeful that something as powerful as the investment tax credit that caused a flurry of new aircraft sales in the 1970s will be passed by Congress anytime soon. Given the deficit situation, Costello is in more of a wait-and-see frame of mind regarding such economic stimulus.

According to Costello, general aviation pilots are a powerful constituency. Smart, articulate, passionate, and active voters, pilots can make a difference in general aviation by communicating regularly with their members of Congress. The chairman called AOPA one of the most respected organizations he deals with in Congress because of the association’s abilities to communicate with legislators—as well as with its membership.

“I can tell you without hesitation that one of the most effective groups is AOPA…and one of the reasons is because they communicate with their members on almost a daily basis. And their members, of course, contact their members of Congress. Communication is the key and AOPA does a phenomenal job of communicating with its members.”

Costello hears from general aviation pilots wherever he goes. When asked the best way to communicate with a member of Congress, the chairman confirms that a personally written letter is the most effective way to get a legislator’s attention.

“When we get the same e-mail from hundreds of people, we know that it’s directed from one group or organization. When I get a handwritten letter from an individual in my district about an issue and it’s not a form letter, I know that they are sincere about it. I wouldn’t discourage anyone from sending an e-mail or making a phone call, but the most effective way in my judgment is to sit down with a pen and do it the old-fashioned way.”