Get the app Get the app
Already a member? Please login below for an enhanced experience. Not a member? Join today
News & Media GA Serves America: Guarding the grid

Power line poles, flashing by at regular intervals, can be mesmerizing—as anyone who has ever taken a long car or train ride across the United States knows. They are no less mesmerizing from about 200 feet agl and 25 feet away, even though a part of your pilot brain is demanding to know why you’re in an airplane this close to 64,000 volts.

General aviation is also a valuable resource for patrolling pipelines, although it’s unusual to see patrol aircraft preserved. Jim Adams of Pontiac, Illinois, completed a five-and-a-half-year rebuild of his 1946 Piper PA–12 Super Cruiser, in the process modifying it into a configuration that pipeline patrol pilots might have flown. “Nobody ever makes a point of pipeline patrol being a part of general aviation history,” he said. “That’s a good thing to pass along.”

Until recently, Adams owned a 90-horsepower Super Cub that had been used by Gleason Romans Pipeline Patrol Co. of Tulsa, Oklahoma, which also operated PA–12s. His Super Cruiser carries the logo of the now-defunct company, which depicts a bee looking at a pipeline through binoculars. With its back legs, the mischievous multitasker is playing tic-tac-toe.

Modifications that Adams made to the airplane included the addition of vortex generators, flaps, disc brakes, a skylight, larger windows, and wingtip and beacon-replacement strobes. The airplane also has an extensively modified instrument panel. He said that he focused on updates that would increase safety and comfort, while maintaining the airplane’s original appearance. —Mike Collins

Power line poles, flashing by at regular intervals, can be mesmerizing—as anyone who has ever taken a long car or train ride across the United States knows.

They are no less mesmerizing from about 200 feet agl and 25 feet away, even though a part of your pilot brain is demanding to know why you’re in an airplane this close to 64,000 volts.

An estimated 500,000 miles of power lines snake their way around the United States. The lines and their supports—poles, pylons, and the like—must be kept in good working order. Ground-bound power company employees do the hands-on maintenance, but general aviation plays an important role by scouting the lines and reporting problems.

On a golden September afternoon in Muskogee, Oklahoma, Stephanie Schledorn demonstrates how it’s done. In the left seat of a 1979 Cessna 172, she keeps us parallel to and within a wingspan or so away from a stretch of lines along a hilly area on the outskirts of Muskogee. “Oh, look, there’s something,” she says, pointing to a broken crossbar on a pylon as it flashes by. “We’ll note that, and let the company know.”

Stephanie and her husband, Mark Schledorn, own Aerial Patrol Inc. They spend hours at a stretch in the 172, flying as low as 80 feet along the grids that crisscross Oklahoma, Nebraska, Missouri, South Dakota, Texas, Colorado, and Arkansas. Regional power companies hire them to be eagle eyes who document “discrepancies.” In power-line speak, a discrepancy is anything that’s not right: broken or damaged equipment, trees and vegetation encroaching on structures, woodpecker holes on a pole. There can be hundreds of discrepancies. A typical day stretches more than eight hours and takes the Schledorns far from their home base, Davis Field (MKO) in Muskogee. They may fly 600 to 800 miles in a day.

When they’re not patrolling, the Schledorns are performing maintenance in a never-ending quest to keep the workhorse 172 running reliably. During busy periods—in March, for instance, when all their clients want to be apprised of winter storm damage—they’ll perform a 50-hour oil change once a week. After all, if the engine fails at low altitude over heavily wooded parts of Arkansas or Missouri, there isn’t anywhere to go. “Reliability is key,” Stephanie Schledorn says.

A tree stand on the ROW

“Hunters,” Mark says. “They’ll build deer stands [on pylons].” Plastic pools, junk cars, tires, sheds, even furniture will appear on the power company’s right of way. Areas around power lines are popular spots for illegal dumping. Vines, tree growth, and fallen branches appear on the cables and structures. Lines are brought down by lightning, or ice storms, or high winds. The Schledorns and their assistant, Tyler Evans, document everything they find. Mark can fly a route alone, but Stephanie prefers to work as part of a team. One person will fly the airplane, navigate, work the radio, and look for discrepancies; the other will log the discrepancies on a laptop computer. Both sets of eyes will watch the lines and scan for obstacles, both on the ground and in the air.

Power companies provide maps of lines to check; the Schledorns supplement these with their own records of obstacles, although they’ve learned not to rely on them: “A cell phone tower can go up very quickly.” Residential TV antennas—they’re still in use—can rise 50 to 70 feet. Then there are airborne hazards: crop dusters, helicopters, and vultures. “Vultures fly at 200 feet,” Stephanie says. 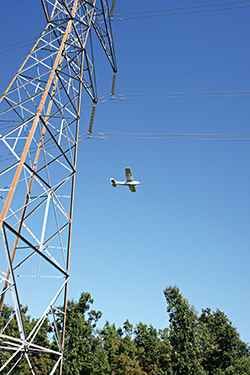 Stephanie Schledorn performs a perfectly coordinated turn in the 172 and follows another series of lines that march to a substation near Muskogee. The airplane’s shadow races over the ground ahead of us. She remarks about homes not far from the power line but adds that she knows the residents, and they are accustomed to the sight, and sound, of a small airplane flying low overhead.

The Schledorns examine transmission lines, the miles and miles of wires and towers that you may see on a sectional (and some that you don’t). These typically carry 64 kilovolts, or 64,000 volts of electricity.

They don’t do distribution lines—the lower-voltage poles along streets and roads that carry electricity to consumers. Flying at such low altitudes in residential areas just isn’t smart. The Schledorns have a waiver from the FAA for the low-level work that they perform, but they take many extra precautions. For instance, Stephanie doesn’t like to fly near roads at low altitudes because it can scare drivers, and scared drivers call the police, or the FAA. “We don’t fly over chicken houses. Cows and horses don’t mind, but goats run.” If a route takes them toward a power plant, they’ll call the shift manager and security guard “and let everyone know there’s a white airplane flying toward the power plant.”

From Super Cub to Cessna

Loren Carlberg Aerial Patrol was founded in 1944 when owner Loren Carlberg made a 300-mile test patrol for Oklahoma Gas & Electric. He used a 65-horspower Piper J–3 Cub, and later a Piper Super Cub, to perform routine monthly patrols—adding more patrols as business took off, so to speak.

The Schledorns bought the business in 2007 and renamed it. With Super Cubs becoming more difficult to obtain, they employ a 172 with long-range fuel tanks.

They also started using GPS data to track where they’ve flown; they save the tracked logs and can provide that information to the power companies if necessary. A Garmin 496 handheld GPS keeps them clear of restricted airspace; the Garmin GNS 430 in the panel is kept on the “nearest” page so that when they fly near an airport the frequencies are at hand.

Low but not too slow

Power line patrols are typically flown at low altitudes, but not particularly low airspeeds, says Mark Schledorn. A veteran crop duster with more than 9,000 hours, he typically flies at 105 knots and 2,300 rpm, and tries to keep G-loads light. Turns, for example, are initiated and then executed in a descent to help reduce the G-load. “When you do [turns] all day long and start doing three Gs, it wears you out,” he explains.

“We don’t go slow,” he adds. “We want an energy state so that if we have a problem we can get out of there.” It’s uncommon to fly slower than 90 knots.

What qualities define a good powerline pilot? The ability to fly the airplane without having to think about keeping it safe; a sharp eye; good radio skills; strong knowledge of airspace. “Someone who can manage the airplane without becoming task-saturated,” he says. Schledorn estimates that it takes a few hundred hours of training to get someone to the point where they can patrol lines safely.

The economic downturn hasn’t affected the business; the Schledorns brought on a contract pilot who handles Missouri. Aerial Patrol typically can traverse a route burning much less fuel than a helicopter and cover a much larger territory. “For real close work and congested airspace, a helicopter beats us,” says Schledorn. “But for long lines, transmission lines, they’ve never been able to beat us.” For example, Aerial Patrol can cover the state of Nebraska in about six days of flying with good weather.

The 172 and a Decathlon are hangared at Davis. The Decathlon isn’t used for patrols, but for aerobatic and upset recovery training, which Mark does on the side. Stephanie is a captain in the Muskogee police department with more than 22 years of service; her long tenure affords her a flexible schedule that lets her devote time to the business.

The Schledorns love their work, hazards notwithstanding. For Mark, who has been a crop duster and contract pilot and flown firefighting missions in Idaho, powerline patrol provides the ability to remain relatively close to home. “The nature of contract flying is we all have to go off somewhere and fly, so it’s neat to be able to stay in your backyard,” he says.

For Stephanie, the enjoyment lies in the low-level perspective. After our visit, she shares photos of a cave, the geometric beauty of icicles on a power line, and a scenic town on a Missouri river—all snapped going to or coming from an assignment.

Then there’s the wildlife—bears, wild hogs, antelope, and wild turkeys. “We see homemade windmills and contraptions, grass landing strips in unexpected places, and interesting structures and houses,” she says. “We know where people are growing their marijuana and dumping their trash…. We see lots of interesting things.”