Get the app Get the app
AOPA Members DO more LEARN more SAVE more - Get MORE out of being a pilot - CLICK HERE
News & Media Look, Ma, no lead

Will this new fuel measure up?

Sitting at a computer console worthy of a place in NASA’s mission control center, George Braly, co-founder of General Aviation Modifications Inc., begins pushing the buttons and flipping the switches that start a Continental TNIO-550 mounted on a test stand. Another extreme workout session for the oft-tortured engine is about to begin.

Working with the industry

Working with the industry AOPA is part of an industry-wide effort in developing a plan to transition the general aviation industry to unleaded fuel. The decisions surrounding a replacement for 100LL goes well beyond the octane number and how well it burns in our aircraft engines. Factors involved in evaluating new fuels include their ability to be produced and transported economically, the impact on existing fuel distribution infrastructure both on and off airports,requirements for potential modifications to existing aircraft, and the impacts on future aircraft certifications.

Leaded avgas is a specialty fuel that’s been manufactured in shrinking quantities since the 1960s, and it’s endangered on both environmental and economic fronts. A year’s supply of avgas accounts for less than one day’s production of unleaded auto fuel, and the Environmental Protection Agency is moving to eventually propose regulations that will require a reduction in lead emissions from GA aircraft. Also, all the tetraethyl lead (TEL) used to make 100LL around the world comes from a single facility in the United Kingdom—and falling demand, spiraling costs, regulatory changes, and an aging distribution infrastructure make future production uncertain.

About 70 percent of today’s piston aircraft fleet could switch to unleaded fuel immediately, but the high-compression and/or turbocharged engines that drive about 30 percent of the 170,000 piston aircraft in the United States could not. They require high-octane fuel—or as yet uncertified electronic engine controls—to avoid potentially catastrophic detonation, and TEL has long provided a reliable method of boosting octane. Leaded avgas also can be stored for long periods, weighs just six pounds per gallon, separates from water, and can be used reliably from the equator to the arctic—all highly desirable qualities that have been extremely difficult to duplicate.

Some have proposed offering two fuels for piston aircraft, but the cost of manufacturing, distributing, and storing two varieties would be prohibitively expensive on most segments of the industry. A few companies are working on potential avgas replacements and showing some very promising early results. Swift Enterprises in Indiana, for example, has developed a high-octane fuel that can be made from non-food biomass, and others are converting fast-growing algae to jet fuel. General Aviation Modifications Inc. (GAMI) has done pioneering work to develop its own petroleum-based, high-octane unleaded fuel.

AOPA has been involved in avgas policy and research since the 1970s and will continue to be engaged in technical and policy developments. AOPA and other industry participants are determined to find a safe and economical way for our industry to make the transition to unleaded fuel. —AOPA Government Affairs

Sitting at a computer console worthy of a place in NASA’s mission control center, George Braly, co-founder of General Aviation Modifications Inc., begins pushing the buttons and flipping the switches that start a Continental TNIO-550 mounted on a test stand. Another extreme workout session for the oft-tortured engine is about to begin.

“Our objective is to abuse this engine without killing it,” said Braly, whose 15-year-old company is best known for making precision fuel injectors and Tornado Alley turbonormalizers, and popularizing lean-of-peak engine operations. GAMI is addressing perhaps GA’s thorniest technical and political challenge—finding an unleaded replacement for 100LL avgas. The subject of Braly’s lab test is an unleaded fuel GAMI developed and calls G100UL (GAMI 100 Octane Unleaded) that it says can safely power the entire piston aircraft fleet, including high-compression and turbocharged engines. With traditional avgas under siege from both economic and environmental forces, GAMI has been quietly developing its own potential solution at its sophisticated engine test laboratory in Ada, Oklahoma, where sister company Tornado Alley Turbo (TAT) also manufactures turbonormalizers. If successful, the move to G100UL fuel could defend GAMI’s core line of products geared toward high-compression, high-performance engines. More than 950 Cirrus SR22s are flying with TAT turbochargers, and GAMI has sold more than 19,000 sets of fuel injection nozzles to date. GAMI expects G100UL will bring in additional revenue through licensing agreements with refiners, but GAMI says it has no intention of going into the refining or fuel sales business. 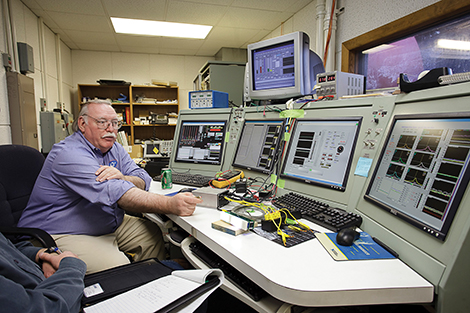 George Braly torments an engine on a test stand, running it harder and hotter until monitors in each cylinder show the beginning of detonation.

But first, GAMI must show that its fuel works. Braly torments the test engine by running it harder, and hotter, than any pilot would ever want to run a similar powerplant on the nose of an actual airplane. FAA certification tests require that the engine temperatures and pressures go to redline, and then the engine must survive being leaned an additional 10 percent. Braly subjects the TNIO-550 to that cruel standard, and more.

With the engine turning 2,700 rpm, at 34 inches manifold pressure, it’s producing more than 110 percent of its rated horsepower and consuming 34 gallons an hour of avgas. Then Braly reduces the cooling airflow to the cylinder heads and watches as CHTs rise alarmingly to 450 degrees Fahrenheit. Next, he leans the mixture until EGTs peak above 1,600 degrees F. He pushes the engine even harder and watches the computer console as warning signs that look like yellow beach balls appear on the screen and fuzzy trend lines indicate the beginning of detonation in all six cylinders.

Interestingly, there’s no audible or outwardly visible sign that destructive detonation is beginning to take place within the cylinders as the powerful Continental continues to roar. Braly switches the engine’s fuel source between three separate fuel supplies: 100LL, a “minimum spec” 100LL, and G100UL—and all indications show that G100UL produces power and avoids detonation at least as well as the leaded fuels. In the case of the minimum spec avgas, G100UL is dramatically better. (The minimum spec fuel is 100LL that barely meets the technical standard. The 100LL purchased at most FBOs has a higher octane level.)

GAMI has run the TNIO-550 and another high-output engine, a Lycoming TIO-540 from a Piper Navajo, on its test stands for years collecting data for engine and fuel certification tests. The Continental on the stand has logged more than 1,100 hours, most of it above its rated 310 horsepower. The company also has flown its own experimental, turbonormalized Cirrus SR22 for about 20 hours comparing G100UL and 100LL in flight.

On a demonstration flight with 100LL in the left wing of the Cirrus and G100UL in the right, Braly takes off on the experimental fuel, climbs at full power, and leans aggressively. He uses an electronic wastegate control to intentionally overboost the engine with a powerful turbocharger that raises manifold pressure to 34.5 inches. The airplane shows no discernable performance difference between the two fuels; the Avidyne engine monitor indicates that the fuel consumption is slightly lower on G100UL than avgas. Braly attributes the lower fuel flow to slightly higher energy density of the GAMI gas, meaning it has more energy (and slightly more weight) in each gallon.

“There’s no question that, from a detonation perspective, G100UL definitely beats min spec 100LL fuel,” Braly said. “And the minimum spec 100LL meets the FAA’s regulatory requirements in every way.”

GAMI officials won’t give details of their unleaded fuel other than to say that it is petroleum based, refined using traditional methods, and contains no exotic or dangerous additives. Unlike leaded avgas, it could be distributed via pipelines or trucks without special handling. (Leaded avgas can’t be moved in the same pipelines as unleaded fuels, and trucks that carry avgas must have their tanks scrubbed before they are allowed to carry other fuels.) Only about a half-dozen U.S. refineries currently produce leaded avgas, and GAMI says that number could increase if they have access to an unleaded alternative. More production, in theory, would increase competition and lower consumer prices at the pump.

Sam Shelton, research director at the Georgia Institute of Technology’s Strategic Energy Institute, said infrastructure considerations are crucial in determining whether a new aviation fuel succeeds in the marketplace. “There are lots of ways to raise the octane level of unleaded fuels. But changing the delivery system is hugely expensive and problematic—and the lowest-cost answer is the one that’s going to win,” Shelton said.

An unleaded, high-performance fuel also could have specialty auto, motorcycle, and marine applications that, taken together, represent a potentially larger market than the roughly 300 million gallons of avgas sold in the United States each year.

“Everything from jet skis to race boats will want to use this product,” Braly said. 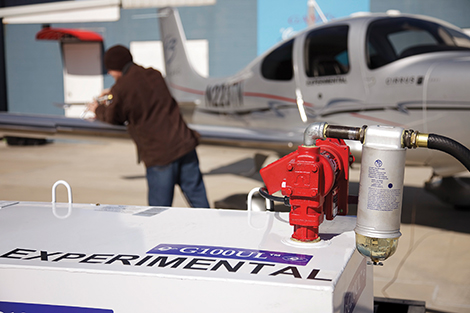 GAMI says its experimental fuel meets the FAA’s existing requirements for aircraft fuels, lubricants, and additives. FAA officials, however, have asked that GAMI and other unleaded fuel makers go through the independent, consensus-based ASTM process—a peer review that typically takes two years or more to complete.

A detailed, highly technical ASTM review would give the FAA added assurance that any new fuel going into 170,000 U.S. piston aircraft has been thoroughly vetted. GAMI says it will pursue ASTM approval; after it gets an STC to use its fuel on specific aircraft and engines.

“There’s no reason to wait on an exhaustive review process before completing STC approvals for a small group of well-understood and narrowly defined high-performance engine installations that can gather real-world data while pursuing ASTM,” Braly said.

GAMI officials insist the FAA’s own regulations and history are on their side. Other fuels, oils, and additives (such as Prist and Camguard) have been approved and widely used for years without ASTM approval.

Braly said making G100UL will require refiners to make some changes to the current avgas production process, but making and distributing the unleaded fuel won’t present major obstacles. G100UL is also designed to mix with 100LL without any change in fuel storage requirements or pilot engine management. “There will inevitably be some technical hurdles, but it does not appear that there are any show-stoppers to producing G100UL,” he said. “The intermediate feed stock components to make G100UL are all commercially available on an industrial scale, and we’re reasonably convinced that G100UL can be produced and distributed within the existing transportation and storage infrastructure.”