Get the app Get the app
Already a member? Please login below for an enhanced experience. Not a member? Join today
News & Media Member Perspective

The AOPA Foundation, Inc., a 501(c)(3) tax-exempt charitable, educational, and scientific organization, educates the public on the value of general aviation. The AOPA Foundation works to improve aviation safety, preserve and improve community airports, and encourages learning to fly for career and personal benefit—all in the interest of keeping pilots safe and safeguarding the future of general aviation in America. Please visit the Website to learn more. 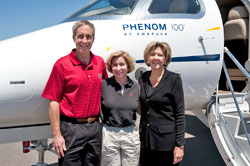 Betsy and Jim Frost are typical Texans—they do nothing in a small way. Take, for instance, their new airplane. The Frosts took the very first

delivery of the Embraer Phenom 100, and Betsy is the first woman to pilot a Phenom. The Frosts flew to EBACE in Geneva, Switzerland, last year and are now planning to fly around the world in 60 days starting in August.

“Flying into EBACE was the greatest thing,” says Betsy. “It got us so pumped up and we said afterward, ‘We’ve got to figure out a way to go all around the world.’”

The couple started planning their trip and will fly a similar route as they did to Geneva and continue from there, stopping and staying with friends along the way. One highlight for Betsy is getting special permission to stop in India and see the Taj Mahal. They will also stop at the Embraer factory in Brazil where their new aircraft was born. “It will be a remarkable trip,” Betsy says. Exactly the type of adventure general aviation can offer.

I met Betsy and Jim in January and was thrilled by their passion. Especially Betsy’s. She’s a pistol. Strong, opinionated, and in love with flying.

Both Jim and Betsy are passionate, highly certificated pilots—the pair have had a race to ratings and Betsy may have won since she is now a CFII (Jim’s not). Jim’s dad was a pilot, and Jim learned to fly before he learned to drive. Betsy grew up near Seymour Johnson Air Force Base in North Carolina and loved watching the airplanes with her dad—“He told me, ‘You can do anything, Betsy.’ And I wish he’d seen me fly.”

They were first Bonanza owners, then had a King Air 90. “We had two girls; we needed a bathroom,” states Jim.

“Flying is fun no matter what you are flying,” Betsy says. “It’s a pleasure and a privilege. We need to show people that aviation is a lot of fun.”

I asked Betsy and Jim about what matters, and they both told me it is protecting what we have. After flying through Europe and now with their round-the-world flight just a couple of months away (daughter number two, Susan, goes off to college and the next day her parents embark on their journey), the couple say, “It’s not perfect [flying in the United States], but it’s the best out there.”

“Everything is simpler in the U.S.,” says Jim. “We really are spoiled and don’t realize it. The avionics, et cetera—everything works. What matters is keeping [flying] free and safe.”

“Keeping it as pristine as possible,” adds Betsy.

As a new CFII, Betsy knows the value of training. In fact, prior to completing her CFII, she was asked to teach a course for spouses of Phenom owners. “I thought, ‘What will I have interesting to say?’ But the women in the class wanted to know everything—everything. I said you will never need all this, but then I had trouble with the computer during the program and when they called me on it and said the aircraft depends on computers, I said, ‘See, if I can do this, anyone can do it.’ I love inspiring others to fly—anyone has the ability to learn to fly. We need to let people know that.”