Get the app Get the app
Already a member? Please login below for an enhanced experience. Not a member? Join today
News & Media Never Again: No lights, no alternate

Never Again: No lights, no alternate

The final leg of the wintertime trip to the West Coast was supposed to be easy. The AOPA Let’s Go Flying SR22 was on its way to California, where it would be awarded to the winner of the 2009 AOPA Sweepstakes.

The Cessna pilot’s decision to gently set his airplane down on the lakeshore to enjoy a few moments of solitude went badly wrong when the airplane sunk to its axles and came to an abrupt stop. Find out how the pilot got his airplane off the beach, and back into the air.

Read this latest installment and other original “Never Again” stories published each month on AOPA Online.
“Never Again” is sponsored by the AOPA Insurance Agency. 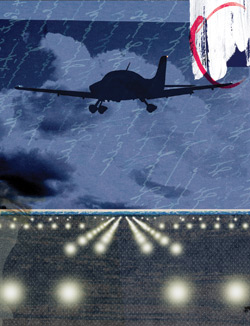 The final leg of the wintertime trip to the West Coast was supposed to be easy. The AOPA Let’s Go Flying SR22 was on its way to California, where it would be awarded to the winner of the 2009 AOPA Sweepstakes. The airplane and I had successfully found our way over, around, or through ice, headwinds, rain, and snow on the previous legs of the two-day dash across the continent from AOPA headquarters in Frederick, Maryland—and I wasn’t expecting any trouble on the final four-hour flight from northern Arizona to Davis/Yolo County Airport (DWA) near Sacramento, California.

The first minor complication came at a fuel stop where the FBO was unable to fill my portable oxygen tank. No matter. Instead of flying a direct route and crossing the Sierra Nevada, I’d go southwest across the California desert and the restricted airspace around Edwards Air Force Base, then turn right and follow the low elevations in the Central Valley to my destination. The longer route would add 30 minutes to the trip, but it was within the SR22’s range, and I’d get there before a cold front swept in from the Pacific.

The flight began well with a smooth ride and visual conditions at 10,000 feet msl. I was on an IFR flight plan, but the forecast for my evening arrival called for VFR conditions (scattered clouds at 2,500 and a chance of light rain) so I didn’t file an alternate airport. The airport has a pair of GPS approaches (LNAV+V) that could guide the SR22 down to 500 feet agl, so the chance of a missed approach seemed remote.

As the headwind was a bit stronger than forecast during the first hour of the trip, and ATC requested that I fly at 12,000 feet for traffic. It was higher than I would have preferred to stay without oxygen, but it would also allow me to cut the fuel burn to less than 12 gph and arrive with a reserve of 30 gallons, so I didn’t protest.

The headwind turned to a crosswind, and then a tailwind—the XM satellite weather on the MFD showed potential trouble ahead. The cold front was moving fast, and rain bands would get to Sacramento before me. Still, the forecasts called for a ceiling of more than 2,000 feet at my 7 p.m. arrival time with light rain and mist, and visibility of three miles. (Around midnight, the ceiling was forecast to drop to 300 feet with heavy rain and winds gusting to 40 knots.)

ATC kept me on a stair-step descent over the Central Valley—all the way down to 2,600 feet while being vectored for the GPS approach to Runway 16 at DWA. I overflew the airport while outbound on the approach and caught a glimpse of the airport beacon below —but no runway lights. I switched the microphone to the CTAF and clicked seven times to turn the lights up to high intensity but still couldn’t see them.

The rain began beating down much harder as Travis Approach vectored me to the initial approach fix and cleared me to turn inbound on the approach. I acknowledged the clearance but the controller repeated it. I acknowledged again with no response. It was raining so hard that precipitation static was interfering with my radio transmissions. The controller asked me to hit Ident on the transponder to let him know I’d received the clearance, and I complied.

If my radio wasn’t transmitting clearly enough for ATC to hear, perhaps it wouldn’t activate the pilot-controlled airport lights, either. And if the runway was dark and I missed the approach, what then? I hadn’t listed an alternate airport destination, and I couldn’t communicate via radio. I resolved to squawk 7600 to indicate radio failure to ATC and head to the nearest airport with an instrument approach and runway lights that were sure to be on—probably Sacramento International Airport about 20 miles east.

I announced my position on CTAF. The FBO on the field, Davis Flight Support, was closed but, I made a request: “If anyone can hear me on this frequency, please turn the runway lights all the way up.” Then a sweet-sounding voice on the radio said, “I’ll get those lights for you.”

It was Mariellen Coupee, the FBO manager (and a CFI), working late and monitoring the radio. There were seven sharp clicks on the CTAF frequency, and the runway and taxiway lit up beautifully. The landing was uneventful, and the airplane was awarded to its new owner two days later.

The avionics shop at the FBO checked the radios on the SR22 the next morning and everything tested fine, so it must have been the heavy rain that prevented ATC from hearing me. It’s also possible that all my frantic microphone clicking had turned the lights on, and I just couldn’t see them until making the last turn on the approach. During future IFR trips, I’ll file alternate airports in my flight plans, even if not required by regulation, so that ATC won’t have to guess my Plan B.

Dave Hirschman, AOPA 1337775, is an ATP and CFII with more than 5,000 flight hours. He has been flying since 1988, is a senior editor for AOPA publications, and resides in Ijamsville, Maryland.