Get the app Get the app
News & Media Pilot Briefing

Starting over: A new life after an accident

Barry Hyde and his guide dog are now full-time employees of the FAA. It was 13 years ago when Barry Hyde lost his eyesight in an airplane crash that almost ended his life. 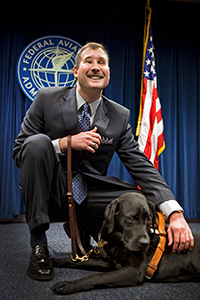 Barry Hyde and his guide dog are now full-time employees of the FAA.

It was 13 years ago when Barry Hyde lost his eyesight in an airplane crash that almost ended his life. Since then, Hyde has made aviation history by becoming the first FAA advanced ground and instrument instructor who is blind. He is the first blind student to earn a master’s degree in aviation science and aeronautics from Embry-Riddle Aeronautical University—with a perfect 4.0 GPA. In December 2009, Hyde landed an aviation safety analyst position with the FAA.

“I want to prevent fellow pilots from encountering what I did and teach them how to handle the situation if they do,” said Hyde, who had to abandon his dream—with 1,600 flight hours—of becoming an airline pilot after the crash. “With this job, I will have the opportunity to contribute my knowledge, research, skills, abilities, and flight experience by writing aviation safety policies and procedures for GA and flight schools.”

Hyde was riding right seat as a safety pilot in a 1965 Piper Twin Comanche for a pilot who wanted to practice his instrument skills. The airplane took off from Concord, North Carolina, bound for Lewisburg, West Virginia. About 22 minutes after takeoff, the engines started spitting. A few minutes later, the right engine stopped. About 10 minutes after that, the left engine quit. An emergency landing site, a baseball field, was selected but the airplane didn’t make it. The Comanche crashed into a patch of trees between two houses, approximately 100 feet short of the intended field and 30 miles from Roanoke, Virginia. The right seat broke on impact, both wing tips with the auxiliary fuel tanks inside were sheared off, and the tail section completely separated from the fuselage.

Doctors saved Hyde’s life and he spent almost three months in the hospital as machines kept him alive. Upon returning home, Hyde struggled with memory loss and had to learn to walk again, but would do it blind. From this experience, Hyde said he has learned several things.

“First, anytime something occurs, I teach students to immediately land the airplane then diagnose the problem. Second, always do a proper preflight and this action will help eliminate some questions to the pilots in the cockpit. Third, do not trust anyone but your mother—and keep an eye on her,” he said.

With a sense of humor and humility, Hyde is also writing a book about his experience, which will highlight questions about the accident that, according to him, should never have happened. Whatever the cause of the accident—improper preflight planning, lack of fuel—Hyde feels better knowing that his experience may help prevent unnecessary accidents.

“I feel what I learned can help other pilots because I have encountered a situation that pilots, hopefully, will never encounter,” he said.

“Accidents are caused by negligence, error, or a combination of both,” he said. “I want to help prevent those costly mistakes.” —Kathryn Opalewski

We pilot dads know that too often our ideas for perfect Father’s Day gifts are, well, a little out there. That new glass-cockpit Husky on amphib floats may be just the ticket for my Saturday morning entertainment, but I also know what the bank account looks like. So, for once, here’s an idea that might, well, fly with mom and the accountant—and be appealing to the husky—but not the kind with wings. Instead, this will appeal to the four-legged huskies of the world, including those that like to fly. Sunflower Seven makes a line of healthy dog treats, including Flying Machines, made from oatmeal and molasses and shaped like airplanes. A 12-ounce box with up to 20 of the bones costs $13.99 and is available online ( www.sunflowerseven.com). The site also carries a plethora of other canine gear and treats. The business is owned by Suzanne Cole, a dog-loving aviation enthusiast based in Kansas City who understands who is dad’s best friend—and who is frequently dad’s best airplane passenger.   —Thomas B. Haines

Mike McDonald with his FlightDesign CT at Montego Bay.

Mike McDonald, an Afton, Wyoming, tire dealer, proved his Flight Design CT has long legs in February when he completed a 6,125-nm round trip to Jamaica. McDonald is a 600-hour private pilot. With him was 85-year-old veterinarian Winthrop Dale, a pilot who completed an around-the-world journey in his Cessna 310 in 1970.

Their average fuel burn was 4.7 gallons per hour, at an average indicated airspeed of 93 knots. “With the useful load of the CT we had enough room for about three days’ worth of clothes, then we would have to do laundry,” McDonald said. “So baggage was no problem. The longest water crossing was Brownsville [Texas] to Merida, Mexico; that was 522 nm. You really have to trust the Rotax 912ULS. It performed flawlessly,” McDonald said.

The route took the two from Wyoming through Nevada to Texas and Mexico before reaching Montego Bay, Jamaica. They then headed to Sebring before returning home.

Reader Plates has excelled at adapting the plates to a viewer in the easiest way possible, and that continues with the PRS-900. Users can search for procedures, set bookmarks, or navigate between states, airports, and individual procedures with a few simple clicks. The screen works with the provided stylus, but it’s even easier to use your finger, meaning you don’t have to worry about losing the stylus or dealing with it in turbulence. Since the hardware is the expensive part of the system, and can be used for other purposes, having electronic plates is now quite a bargain.

Members of the Women’s Airforce Service Pilots of World War II have received the Congressional Gold Medal for their service. The presentation took place in the United States Capitol.

More than 1,100 former WASP will receive bronze replicas of the Gold Medal, which will be placed on exhibit in the Smithsonian Institution. Also receiving bronze medals are the families of 11 pilots killed during training.