Get the app Get the app
Already a member? Please login below for an enhanced experience. Not a member? Join today
News & Media Technique: When Abnormal turns ugly

Keeping practice in its place

It’s ironic that when practicing emergency procedures we can sometimes set ourselves up to create the very problems we’re trying to avoid. “Don’t let a simulated emergency turn into the real thing,” flight instructors are told, and that’s great advice. 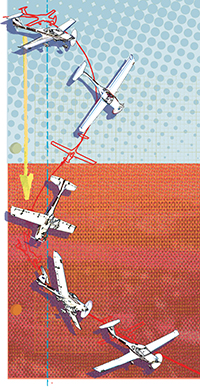 It’s ironic that when practicing emergency procedures we can sometimes set ourselves up to create the very problems we’re trying to avoid. “Don’t let a simulated emergency turn into the real thing,” flight instructors are told, and that’s great advice. But what about some specifics to keep us out of trouble? That’s more difficult to address, simply because there are so many ways a flight can go wrong—and very quickly, at that! Here are a just a few issues to ponder whenever you’re faced with abnormal situations.

Carburetor heat. In carbureted engines, carburetor ice can develop under a wide range of temperature and humidity combinations, and sometimes it can catch us off guard. First comes engine roughness—sometimes enough to make the instrument panel blur—so we’re highly motivated to apply carburetor heat, to melt the ice and have power restored. That’s fine, but sometimes the melting ice can make the engine run even rougher. That’s when we’re tempted to remove carburetor heat in an attempt to get back to a more “normal” condition.

The problem here is that you’d be doing more harm than good. Without carburetor heat, the ice will continue to build, and you could be faced with a much worse situation: a dead engine, starved for air. The lesson here is to leave the carburetor heat on and accept some roughness as the engine ingests the meltwater. It may take an uncomfortably long time, but eventually power should be restored. Which brings up another point: Carburetor heat is hottest at high power settings, so after a bout of carburetor ice try adding power, leaving carburetor heat on; leaning the mixture to adjust for the warmer, less-dense air entering the intake manifold; and continue flying that way.

Engine-out practice. Speaking of carburetor heat, failing to apply it during forced-landing practice in piston singles can lead to the real thing. Check your pilot’s operating handbook for specific instructions, but it’s always a good idea to apply carburetor heat when practicing low-power maneuvers, such as power-off stalls and simulated power-off landings. Otherwise your “simulated” engine-out could become the real thing.

Spin recoveries. Practicing spins is a great way to build confidence and skill. However, not all airplanes are certified for spins, and some are placarded against them. The danger can come after entering an inadvertent spin. The airplane may not behave in a conventional manner, and standard spin-recovery procedures may not apply. Finally, pulling too many Gs during the recovery may tax the airplane’s structural integrity. This is all the more reason to have an experienced instructor with you when your training calls for stall practice—especially cross-controlled stalls.

GPS knobology. It’s one thing if you’re IFR-current, fly a lot in the ATC system, and know your GPS inside and out. It’s quite another if you’re a renter pilot who flies occasionally, perhaps switching between receivers, and then discovers—in the soup—that you can’t recall the drills for making flight plan changes, calling up or creating waypoints, or executing the missed-approach entry procedures.

At this point in the discussion you’re expecting a recommendation to get some quality dual or simulator-based instruction to prevent awkwardness from degenerating into something far more dangerous. Which is, of course, a good idea. But the truth is that many flight instructors are not familiar, or familiar enough, with IFR GPS operations. Or to put it another way, let’s say your instructor may not be completely familiar with the GPS unit in your airplane. If that’s the case, receiving dual instruction in actual instrument meteorological conditions can definitely do more harm than good. The last thing you need is two pilots fumbling with menus and guessing at button-push sequences during an approach or missed-approach procedure.

Those who have, and those who will. Planning on stepping up to retractable-gear airplanes? Already checked out, but getting recurrent training? Beware the many traps that can lead to a gear-up landing. Sure, you do at least one GUMP check while flying the traffic pattern. But instructors like to pack as much learning into your dual time as they can, and this can mean extra tasks during takeoff and landing practice sessions. So simulations, such as those for inoperative flaps, the loss of a glideslope signal, a system problem, or a loss of power can introduce distractions that take your attention away from landing-gear extension. The answer? Fly away from the pattern, do your troubleshooting, then return to the airport. And make a final check on final approach—to be sure that the landing gear is down and locked. Whatever you do, don’t try to perform the emergency landing gear extension procedure while in the traffic pattern or on approach. The gear probably won’t come down in time, and you could lose control of the airplane as you try to fly while pumping/cranking the emergency gear handle.

Popped circuit breakers. Before you deal with a popped circuit breaker, think hard. The breaker popped for a reason. Often, that reason is a short circuit or other problem that caused an electrical connection to overheat. Resetting the offending breaker restores current to the fault, and may create the very fire that the breaker was designed to prevent. Conventional flight instructor wisdom holds that you should reset a popped breaker once. If it stays in, then carry on with vigilance. If it pops again, leave it be. Now there’s a body of opinion that says never reset a popped breaker. Why ask for more trouble? By the way, you do know which components will be lost when their associated breaker pops, don’t you? And you do know how to work around the problem, no? Better dig out the checklist!

To feather—or not? Multiengine instruction has become wiser since the scary days before the late 1970s. But there are still instructors out there who insist on for-real feathering in simulated engine-out situations. This is wonderful practice—at altitude. You get to deal with the changing rudder trim requirements, and complete an actual shutdown. You can see for yourself what sort of single-engine performance your airplane can—or can’t—provide.

Now think about how this simulation can turn into a very real engine-out problem. What if the engine won’t restart? Now you’ll have to commit to a single-engine landing. That’s another good drill, but unless you have a long runway it could be a practice session that ends with an unintended overrun. That’s because twins with a feathered propeller have much less drag, so they float longer in ground effect. That’s especially true if you’re a tad fast on final. The moral: Use zero-thrust power settings to simulate engine-out situations—unless you’ve got a long runway nearby.

VMC demonstrations. Perhaps you’ve read about just how bad the “bad old days” of multiengine instruction really were. Here are some examples:

These days, all the stunts mentioned above are off limits. Practicing them puts you at very high risk of losing control, no matter if you’re a high-time instructor or a multiengine student on his or her first lesson in a twin. Of all the risks mentioned above, single-engine work in light twins surely must rank as the most likely to turn suddenly dangerous, and startlingly quickly.

Of course, we’ve tallied just a partial list of the ways abnormal situations can turn deadly. If there’s a universal truth behind avoiding many of these sorts of traps, this one must rank high: Pause before making any lightning-quick moves. Think about that the next time you mash in a circuit breaker or turn off the carb heat to stop engine roughness. There are times for fast action—very few, it turns out—but many more times when a steady hand and good judgment save the day.