Get the app Get the app
AOPA will be closing at 2:30pm ET Wednesday, November 23rd, and will remain closed Thursday and Friday in observance of the Thanksgiving holiday. We will reopen Monday November 28th at 8:30am ET.
AOPA Members DO more LEARN more SAVE more - Get MORE out of being a pilot - CLICK HERE
News & Media Tin Goose

Have you flown a Ford lately?

Personal letters arriving in the U.S. mail are so rare these days that when one arrives it’s guaranteed to draw my attention. 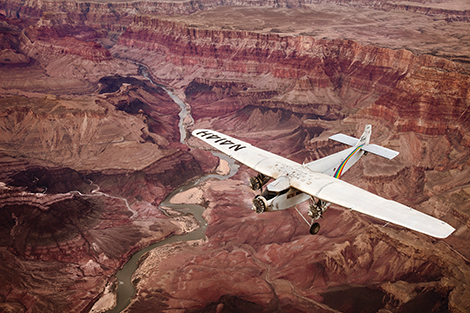 Personal letters arriving in the U.S. mail are so rare these days that when one arrives it’s guaranteed to draw my attention. This one was from N. Jacob “Jake” Libby of Olympia, Washington. He introduced himself as a 23-year-old corporate chief pilot with more than 7,000 logged hours and an impressive pedigree of ratings.

He explained that he and a friend were going to Arizona to obtain type ratings in a Ford Tri-Motor. Learning of my fondness for vintage aircraft from past articles in AOPA Pilot, he wanted to know if I would like to join them in what would surely be an exciting, albeit expensive, adventure into aviation’s pioneer era.

Because this is the only Ford Tri-Motor in the world available to the public for training and type ratings, Libby was concerned that this window of opportunity would someday close. His letter ended with, “There are those who make things happen, those who watch things happen, and those who wonder what happened.”

Libby obviously is a young man who knows how to make things happen. In my case, he pushed the right buttons. I have always been passionate about flying vintage aircraft. The lovable Tri-Motor was America’s first all-metal transport and became one of the most-recognizable and best-remembered airplanes of all time. It was affectionately known as the “Tin Goose,” perhaps because Ford’s Model T automobile was called the “Tin Lizzie.” It also was nicknamed the “Flying Washboard,” a reference to the Ford’s corrugated aluminum skin.

Another reason for being enthusiastic about flying a Ford was that Transcontinental Air Transport, the predecessor to my airline (TWA), used the Tri-Motor to inaugurate America’s first transcontinental air service. Well, sort of. On July 7, 1929, 10 passengers at Pennsylvania Station in New York City purchased $350 tickets and boarded a train with sleeping accommodations that took them to Columbus, Ohio. There they connected with a Ford Tri-Motor that whisked them off to Waynoka, Oklahoma (with four en route stops). They then boarded another train with sleeping compartments and traveled to Clovis, New Mexico, where they connected with a second Tri-Motor. After three en-route stops, they arrived in Los Angeles only 48 hours after leaving New York. (Charles Lindbergh was at the controls during the first leg of the inaugural eastbound flight.)

So it was that the Tri-Motor Class of December 2009 gathered at the Valle Airport (between the Grand Canyon and Williams, Arizona) on a frigid day last December. Joining Libby and me was Thad Kelly, a United Parcel Service pilot from Louisville, Kentucky, and Jim Koch, an anesthesiologist from Falls Church, Virginia. The bonding between us was immediate because of the affection we shared for antique aircraft. Libby confided to me that he had tried to get some of his friends to join him in getting a Ford rating. “It was really sad,” he said. “They weren’t the least bit interested in flying ‘such an old airplane.’”

Also joining us just for the ride was Libby’s dad, Nick Libby, a retired FedEx MD–11 captain who had given Jake his first lesson in a Cessna 150 when he was in the second grade. “I taught Jake to fly. He was ready to solo at 13 and finally did solo before getting his driver’s license,” he said proudly. Jake is the epitome of enthusiasm and hopes to follow in his father’s footsteps as a FedEx pilot.

We were introduced to N414H, a 1929 Ford Tri-Motor 5-AT-C (model 5 air transport) by Bryan Godlove, our instructor and “den mother” for the next few days. Godlove also is a Boeing 777 captain for United Airlines, but he most enjoys flying the Ford, in which he has logged 1,300 hours over the past 26 years. “This airplane,” he told us, “was used as a demonstrator on floats for two years before being operated by Pan American Airways in Latin and South America during the 1930s. It has plied the skies for 18,000 hours.”

A type rating is not required to fly the smaller 4-AT because it weighs less than 12,500 pounds; the larger 5-AT has a maximum gross weight of 13,500 pounds.

The Ford Tri-Motor seems to combine the size, shape, and configuration of the earlier Fokker F.VII with the type of metal construction and corrugated skin employed by the German manufacturer, Junkers. The main-gear tires are large, the same as those on the Boeing 737, which makes the airplane suitable for landing on unimproved surfaces such as dry lakes. Each wing has a drop-down locker in which 400 pounds of baggage can be carried. A unique feature of the Ford is the external elevator and rudder cables that run along the sides of the fuselage to the tail. The aileron cables are internal.

Fuel pressure and oil temperature gauges for the outboard engines are installed on their respective engine support struts. Pilots must look outside the cockpit to obtain these vital indications. No wonder that pilots of yore had to have the visual acuity of eagles. Gauges for the center engine are on the instrument panel.

That is not all that is weird. The carburetor-heat control for the center engine is on the instrument panel, but the carb-heat controls for the outboard engines are on a bulkhead above and behind the pilots’ heads. The hand crank for the elevator trim tab also is on this bulkhead, but it turns in the fashion of an aileron-trim control. Until you adapt to this unorthodox movement, it is important to think before cranking.

Starting the three 450-horsepower Pratt and Whitney R-985 engines in frigid weather is more art than science and requires finesse, coaxing, seduction, and patience. You engage the electric starter—original Fords had inertia-wheel starters—and observe that the engine cranks normally. This demonstrates that oil has not pooled in the bottom cylinders and created a hydraulic lock that could interfere with starting and damage the engine. You then turn on the magnetos and the ignition boost (sort of like a “shower of sparks”) and tap intermittently on the spring-loaded electric primer switch according to how the engine comes to life. Continue priming intermittently after the first cylinder fires and until the other eight belch smoke and join the chorus. Each engine drives a fuel pump but does not have either a boost or auxiliary pump.

Fuel flows gravitationally from all three wing tanks into a single manifold from which all engines are nourished. It is rock simple and eliminates the need for a crossfeed system in the event of an engine failure.

The Tri-Motor is a very long taildragger. Be careful when making tight turns on narrow taxiways so that the tailwheel doesn’t swing off the tarmac and into the dirt. This requires adroit use of differential braking and power.

The non-steerable tailwheel cannot be locked for takeoff to assist in keeping the airplane heading down the runway during the early phase of the takeoff roll. As a result, the p-factor created by 1,350 horsepower with the airplane rolling in a nose-high attitude creates a strong tendency to yaw left. This can be countered easily, however, by leading with the left engine as power is advanced for takeoff.

The Ford is one of those machines that efficiently converts fuel into massive gobs of noise, and earphones in the cockpit are an absolute necessity. The insulated cabin is thankfully quieter. 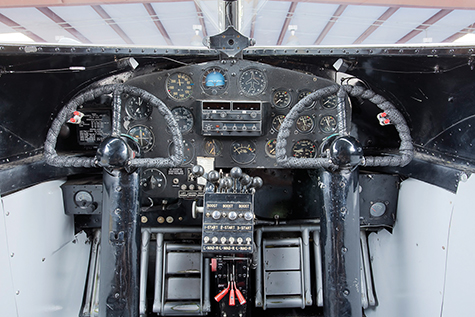 The environmental control system consists of air scoops on the floor of the cockpit and side cockpit windows that open for limited ventilation, but that’s about it. A placard could be placed on the instrument panel that reads, “To increase cabin temperature, fly in the summer. For maximum cooling, fly in the winter.”

The airplane does not have a stall-warning device, nor does it need one. It is virtually impossible to pull hard enough on the control wheel with one hand to force the wings into a stall unless you have the Herculean strength needed to overcome the Ford’s extraordinarily heavy pitch forces. The only way to stall the airplane is to wrap both arms around the backside of the control wheel, as if giving it a bear hug, and haul back with a mighty heave.

When you get the wheel fully aft, the airplane does not pitch down; it simply mushes in a nose-high attitude. Inadvertent stalling seems impossible. Power-on and power-off stall speeds, if you can get the airplane to fly that slowly, are the same, 64 mph, because there is no propwash blowing over the wings.

The greatest exertion, however, is required to push the rudder pedal hard enough to combat the failure of an outboard engine. You have to either lock your knee so as to keep your leg extended or use both feet on the one rudder pedal to maintain heading. There is no rudder trim to lend a helping “foot.” Nor do the propellers feather. The failed engine’s propeller is set to high pitch to slightly reduce windmilling drag. This is a physically demanding exercise.

A conservative power setting yields a cruise speed of 100 mph, and adding power does not result in much more. Aviation writer Marc Cook refers to the Ford Tri-Motor as a “flying speed brake.”

Godlove prefers his students to make tail-high wheel landings. Three-point landings apparently can damage the tailwheel assembly. Fortunately, wheel landings are not challenging and can be made with a satisfying chirp with just a little practice. The tail is held high after touchdown to maximize airflow across the rudder for directional control. Once the tail begins to come down and the tailwheel is “landed” softly, the pilot needs to move his feet onto the toe brakes, which are then used differentially to track the centerline and turn off the runway.

Flying a Ford Tri-Motor is like roaring through the pages of aviation history. It is entering a time warp and returning to a simpler yet more challenging era. Unlike many modern aircraft, vintage machines have unique personalities reflective of a bygone era.

The Ford Tri-Motor is a primitive machine but our respect for what it accomplished in advancing the popularity and efficiency of air travel heightens substantially when considering that the first one rolled off the production line only 23 years after the Wright brothers’ first powered flight.

In addition to being a training aircraft, N414H is used for barnstorming, appearances at airshows, delighting passengers during sightseeing flights, and making cameo appearances in motion picture and television productions.

Those interested in becoming a type-rated Tri-Motor captain should be proficient in multiengine flying and have a tailwheel endorsement. Experience with radial engines is not necessary. Additional information can be obtained online.

N414H is owned by John Seibold, an engineer/physicist with a seemingly unbridled enthusiasm for flying.

He once owned Scenic Airlines and Grand Canyon Airlines and helped visitors to get a grand view of the Grand Canyon. He also was selected by the Las Vegas Review-Journal as one of the 100 people who most influenced the evolution of southern Nevada in general and Las Vegas in particular.

Seibold purchased N414H to keep alive the heritage of Grand Canyon Airlines, which operated Ford Tri-Motors. He keeps it and a growing collection of vintage aircraft and automobiles that are part of Grand Canyon history at Valle Airport, which he also owns. “It is important to keep this iconic airplane in the air,” he says adamantly, “even if it doesn’t pay for itself.” Valle Airport also is the home of a museum built by the Planes of Fame Air Museum of Chino, California.