Get the app Get the app
AOPA will be closed July 4th, in observance of the Independence Day holiday. We will reopen at 8:30 am ET on Tuesday, July 5.
News & Media Wx Watch: Summer&rsquo;s danger zones

The chart at right shows the mean number of days having thunderstorms. The prize goes to the western half of peninsular Florida, with 130 days.

The chart at right shows the mean number of days having thunderstorms. The prize goes to the western half of peninsular Florida, with 130 days. Northern New Mexico (110 days) and central Colorado (80 days) aren’t shabby, either. Source: Storm Data, national Climatic Data Center, NOAA.

Climatology—the study of the generally prevailing weather conditions common to a region—often gets short shrift in pilot training curriculums, but there’s a lot to be said for having a good handle on regional weather patterns.

Maybe it’s because climatology can seem so vague and generalized. We want detailed, route-specific weather information when we plan our flights—especially long cross-country flights—and for good reason. But for those venturing into unfamiliar regions for the first time, after a lengthy interval, or a different season, knowing what’s in store weather-wise can really boost confidence and enhance preflight planning.

With this in mind, let’s go over some summertime climatological patterns that all pilots should know. But first, let’s put climatology in perspective as a forecasting tool.

An old saying holds that “climate is what we expect; weather is what we get.” How true! Still, climate does play a role in the grunt work of day-to-day forecasting. Here’s a super-simplified list of the informational content within the “technique strata” that forecasters use, using thunderstorms as an example, and drawing on Tim Vasquez’ excellent Weather Forecasting Red Book:

While forecasters use all those approaches, note that climatology can serve as a kind of baseline to rule out quirky computer model output, or prevent forecasters from going too far out on a limb when they think about predicting atypical weather. “Know thy climo [climatology],” a meteorology professor cautioned me, meaning that climatology can provide perspective when you’re tempted to go along with a computer model’s “flavor of the day.” 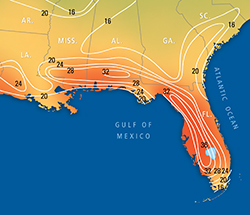 Central Florida, with a mean annual thunderstorm count of 130, ranks at the top of the list for convective activity. Most of these, of course, occur in the warmer months of the year.

But don’t fixate on 130 storms. A mean number indicates that half the time there are more than that number of storms, and half the time, less. Still, this ought to be enough to convince you of the likelihood of thunderstorms. As an aside, the area east of Tampa takes the prize for the most lightning activity in the United States, with a mean annual of 36 cloud-to-ground flashes per square kilometer!

The central portions of the nation are also known for mesoscale convective complexes (MCCs), which are huge, self-sustaining storm systems that can cover entire states and can regenerate themselves over several days. The fuel for MCCs comes from upper-air jet stream dynamics and flows of warmer, moist air from the Gulf of Mexico. In the summer months, two to three MCCs typically happen each month. Many times, they form north of east-west stationary fronts.

Coastal fogs affecting airports in Northern California happen primarily in the winter months—when instrument meteorological conditions (IMC)—occur approximately one-third of the time, according to climatological records. But the summer months can bring their share of IMC. The mechanism typically involves summertime heating of California’s Central Valley. This heating creates semi-permanent, thermally induced low pressures over the valley. This, in turn, draws colder, fog-laden marine air inland. Often, these dense summer fogs flow through gaps in the coastal terrain. The Golden Gate Bridge marks one of the biggest of these gaps, but there are others. The areas covered by summer coastal fogs in Northern California may not be as extensive as in winter, but records show that they can frequently occur.

Southern California is home to a marine inversion layer—another coastal-fog phenomenon. The setup here involves the interplay of several elements. First, there’s usually a large area of high pressure aloft. This creates sinking air that heats as it descends, causing temperatures aloft as high as 80 to 90 degrees Fahrenheit. Meanwhile, cold ocean currents keep temperatures near the surface 20 to 25 degrees F cooler. That’s cold enough for temperatures to meet the dew point and, presto, a layer of cloud appears over the Southern California coast. Bases usually run 500 to 900 feet agl, and tops typically reach 1,000 to 1,500 feet msl. So it’s a shallow layer of clouds, trapped beneath the temperature inversions, but it’s deep and thick enough to warrant instrument approaches to the many airports located along the California coast. Often, this marine stratus layer moves inland in the early morning hours, then burns off with the heat of the day.

Lows and fronts originating in the North Pacific have habits of making landfalls along the Washington and Oregon coasts, and these are responsible for vast areas of IMC in these regions. That ocean is cold—cold enough to cool the already-cool air above it to the dew point and create dense coastal fogs. Most affected is Washington’s Olympic Peninsula, and the coastal ranges extending to its south—all the way to Oregon. In these regions, climate data show IMC prevailing anywhere from 20 to 29 percent of the time.

Is all this too “big picture” for you? I hope not, because chances are you’re going to hear more of the same kind of language in your preflight briefings when flying in or near the areas we’ve just addressed. It’s all part of the synoptic, large-scale features that distinguish one chunk of terrain from another. Features that should make every pilot a keen student of geography. After all, air masses are, to a very large extent, creatures of the land and sea beneath them. Good thing for us that they behave in more or less predictable ways through the seasons.