Get the app Get the app
Already a member? Please login below for an enhanced experience. Not a member? Join today
News & Media You can dress it up and take it out

You can dress it up and take it out

The Expedition E350 is happy in any situation

Airplanes, like motorcycles, cars, and pretty much anything else with an engine, often serve niche roles. For most of us the perfect airplane probably doesn’t exist. 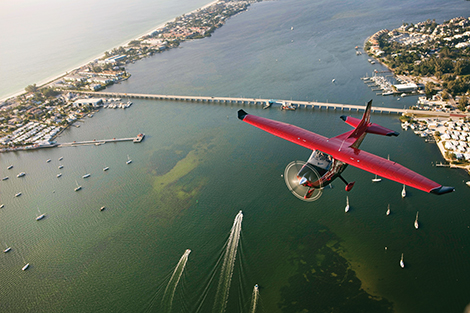 Airplanes, like motorcycles, cars, and pretty much anything else with an engine, often serve niche roles. For most of us the perfect airplane probably doesn’t exist. Antiques are loads of fun but you probably wouldn’t fly one with your family in the weather. And the traveling speedster is often intensely practical, but it may not be the type of machine that encourages you to hang out at the airport. Found Aircraft is hoping to fill at least two needs with its new Expedition E350, a hybrid that’s part bush airplane, part Bonanza-like traveling machine. At least, that’s the sales pitch.

The Expedition E350 is a five-place, tricycle-gear airplane made by Found Aircraft Company, Parry Sound, Ontario. Many know Found from the Bush Hawk-XP, a tailwheel bush airplane the company built in different variations going back to the middle of the last century. The Bush Hawk was strictly a utilitarian airplane, seeing most of its service in Alaska and other cold places with rugged terrain. Competition forced the original owners, the Found brothers, out of business in 1967. Seeing a revitalized market for the airplane, a new owner came in 1996 and restarted production on a yet another variant of the Bush Hawk.

Realizing the obvious fact that bush airplanes have a limited appeal, the new owner set about creating a model to attract a broader audience, and the company created what would eventually become the Expedition E350. Because it wanted to market the E350 as a polished, certificated airplane that just happens to be at home in the bush, Found Aircraft started a new company called Expedition Aircraft to market and sell the airplane. But for all intents and purposes, the E350 is a tricycle-gear, spruced-up version of the Bush Hawk-XP.

The Bush Hawk lineage is apparent from the moment you look inside the cockpit of the E350. Although equipped with comfortable, well-made seats and a pleasing interior, the cross braces, overhead headset jacks, four-point harnesses, sparse, flat instrument panel, and other utilitarian features clearly indicate it’s an airplane made to work. But that’s not to say the benefits of the bushplane heritage somehow count against the airplane’s merits as a traveling family machine. In fact, many of those things make it even better as a family hauler.

The cabin width is a great example, as the E350 is likely one of the biggest four- to five-seat cabins you’ll ever find. At 45.5 inches, it’s more than three inches wider than the Cessna 206, its main competitor. That means a family of four will be incredibly comfortable, likely with as much arm and leg room as they would have in their minivan or mid-size SUV. As an added benefit, the back seats come out with a couple of quick steps, making it a great airplane for camping. Loading that camping gear, or nearly anything else you can think of, is easy thanks to doors that swing open 180 degrees, leaving an opening large enough to fit a 55-gallon drum sideways—literally. The E350’s unique dual fuselage construction allows for such a wide door opening. From the back of the cabin forward, the airplane is a steel-tube cage covered with carbon fiber. That allows mounting points for the float kit, as well as a direct bolt-on point for the landing gear. Aft of the cabin, it’s a monocoque fuselage.

The wing is also two distinct shapes, although it’s built in one piece. The outer portion has a lower angle of attack to increase aileron effectiveness at slow speeds. According to demo pilot Ted Dirstein, the Alaska Fish and Wildlife Service was a big user and its pilots requested new wing tips for better controllability close to the stall. They got them, an improvement Dirstein said accounts for an increase in dihedral. Bush airplanes also need to have a rugged wing, and the E350’s three spars should be more than enough. The fat inner portion also provides room for 100 gallons of fuel, enough to go from Toronto to Florida nonstop on one of Dirstein’s flights.

Another indication of the E350’s split personality is the panel options. Anything from a conventional six-pack configuration to a dual-screen Garmin G500 is available on the E350. The panel and surrounding trim is sparse with a utilitarian feel. It’s not the type of set-up that will appeal to a buyer of a Cessna Corvalis 400TT, for example. But there is space for all the necessary equipment one would expect to find in a modern airplane, including an electronic engine monitoring system, Garmin GNS530 GPS/Comm, and S-Tec Fifty Five X autopilot.

Dirstein said the E350 is perfect for the person who has a house with a grass strip in Montana or Idaho. It’s for someone who wants the ease of a nosewheel with the load-carrying capability and space to bring in heavy gear, and the looks to fit in at a busy urban airport. If the compliments and questions we received while on a test flight are any indication, they’ve nailed it. It’s unusual to hear people compliment an airplane over the common traffic advisory frequency, but it happened multiple times during our short trip. On the ground, people flock to the airplane for its beautiful paint scheme and unique appearance. It’s shaped to look like the workhorse it is, with a large cowling covering the 315-horsepower Lycoming IO-580-B1A engine, and a broad fuselage with fat wings and a large tail. So there’s no question they got the looks right. And with a 1,500-pound useful load, the E350 will clearly carry pretty much anything you can put in it.

But that’s only part of the equation of selling airplanes. To gain any sort of respect as a bush airplane, it needs to have good handling at low airspeeds, take off and land in a short distance, and cruise at a reasonable pace. Here, too, the E350 hits the marks.

Since our demo flight took place in the United States and the airplane we flew was still being used for testing, we were confined to pavement. But seeing that Found is trying to broaden its appeal, this seemed appropriate. He said it was an FAA limitation put on the test airplane.

Max gross weight for the E350 is 3,800 pounds. We weighed in at around 3,080 pounds the day of our test. Takeoff can be done with 25 degrees of flaps. By holding the brakes for a short-field takeoff procedure, the airplane was practically off the ground before we blinked, say 800 feet or so. Vortex generators are standard, which is part of the reason short-field takeoffs can happen at about 60 knots. And despite the large amount of power, left-turning tendency wasn’t a problem.

We climbed at 1,200 feet to 1,500 feet a minute, plenty to get above obstacles at most airports. Once in cruise, the airplane handled brilliantly. It was superbly rigged, with easy aileron control. Pitch was heavier, as is the case in most airplanes of this category. But because E350 owners are accustomed to chopping wood at their Montana cabins, arm strength shouldn’t be an issue.

The airplane was happy at all speeds and configurations, including aggravated and cross-controlled stalls. Dirstein even demonstrated a 2-G canyon turn, which is basically a steep turn performed at a minimum airspeed with flaps deployed, so as to make the turn in the smallest radius possible. An experienced bush pilot could probably execute the maneuver safely, which only lost us 50 feet.

One of the nicest things about the cabin are the doors. Side pockets hold charts, pens, and all the other must-have items nicely. Even better, the side windows go almost down to the floor in places, giving all of the passengers a spectacular view. The front windows even bow out a bit for an even better look. A not-so-nice holdover from the bush heritage, however, was the cabin noise. Good headsets are necessary in the loud cabin.

After the airwork we cruised to another airport for some takeoffs and landings. At 5,500 feet and 75-percent power, we were showing 16.5 gallons per hour and 160 knots true, a very respectable speed and fuel burn. Cooling wasn’t a problem, either; the cowl flaps remained closed the entire flight and temperatures were well within normal limits.

The E350 has wonderful landing characteristics. As in the takeoff, the vortex generators allow it to fly at low airspeeds that, when combined with the tapered steel tube gear, will make any pilot look good. There are no finicky traits such as a clunking nosewheel, thudding main gear, or super-springy bouncing. It’s easier to land than one would expect in an airplane with heavy pitch characteristics. The hardest part about landing is probably taxiing off the runway with the castering nosewheel, although such equipment is becoming increasingly common in newly designed airplanes. It also makes it very easy to maneuver on the ground, an important point in the bush, according to Dirstein.

Things such as the castering nosewheel are a great indication as to the design philosophy behind the E350, which was to meld the ultimate utility airplane with one that wouldn’t look out of place at a busy urban airport. Is it the best bush airplane available? Probably not in a nosewheel configuration. But for those of us who aren’t landing on gravel bars, the ramp presence, incredible range, respectable speed, and remarkable payload make it a great option for hauling the family, or for getting some groceries up to the cabin for the weekend.