Get the app Get the app
AOPA will be closed July 4th, in observance of the Independence Day holiday. We will reopen at 8:30 am ET on Tuesday, July 5.
News & Media New Eclipse offers customers upgrade options

While quiet for the last seven months, officials at the new Eclipse Aerospace Inc. have been busy breathing new life into the Eclipse 500 twinjet project that launched the light jet phenomenon.

Co-founders Mike Press and Mason Holland have found new rounds of funding to begin upgrading the existing fleet of 260 airplanes after buying the company out of Chapter 7 bankruptcy in the fall of 2009. Technicians at the Albuquerque, N.M., headquarters have already upgraded about 20 percent of the fleet to reflect what Press says the airplane was always meant to be; another 10 percent are at the facility now undergoing upgrades.

Eclipse Aviation Corporation went bankrupt in part because it rushed the airplanes into production before they were finished. Those delivered were only about 80 percent done, according to Press. The new company is offering several upgrades to existing airplanes; the number of upgrades varies depending on when the airplane was produced. Some early airplanes, for example, will need about $500,000 in upgrades, which includes replacing the original Avidyne glass cockpit with displays built by IS&S, installation of dual Garmin GNS 400W navigators, a new S-Tec autopilot, and other mods to make the airplanes capable of flight into known icing conditions (FIKI).

Some later airplanes came from the factory with the IS&S displays, known as Avio NG, but still need the navigator and autopilot upgrades along with the FIKI icing upgrades, which costs about $200,000; known as the Avio NG 1.5 upgrade. Avio NG 1.7, which is a software upgrade to 1.5 airplanes, allows the display of moving maps and instrument charts on the multifunction display. That upgrade should be available soon.

Meanwhile, owners can now get parts for their airplanes since Eclipse Aerospace has received FAA approval to manufacture and ship parts through its service center. 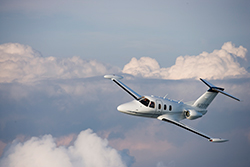 The company will also take earlier airplanes in trade toward the purchase of a Total Eclipse airplane.

Looking further into the future, Press and Holland are working on due diligence to begin manufacturing new airplanes. Details of that plan and the approximately $50 million needed to fund the project will be made available later this year, according to Press.

Look for more details about the status of the company in an upcoming issue of AOPA Pilot.