Get the app Get the app
We will be performing maintenance on our systems Sunday, 8/21, beginning at 12:00 A.M. ET and ending at 6:00 A.M. ET. During this time, you may experience intermittent service outages. We appreciate your patience.
News & Media How will the iPad change the GA cockpit?

How will the iPad change the GA cockpit? 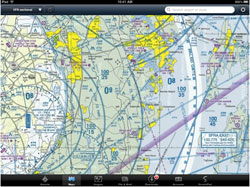 It can display radar and satellite weather maps in rich color, whether you’re in the office or on the ramp. It can download and store charts, approach plates, taxi diagrams, and checklists—or, if you prefer, entertain your passenger with an in-flight movie.

The versatility of the iPad means it has a variety of potential uses for pilots, and software developers are already taking advantage of the technology. Aviation products in the iPad app store range from a digital E6B to fully integrated flight planning programs with weather maps, radar displays, and downloadable airport directories.

It’s not the first tablet computer to make its way into the cockpit, but the iPad brings the technology of electronic flight bags (EFBs) within reach of a much broader swath of general aviation pilots. Airlines began using EFBs in the 1990s, but they have been slow to arrive in the GA marketplace because of a price point that makes them impractical for most Part 91 operators. (See the February 2009 AOPA Pilot article “Avionics: Electronic Flight Bags” to find out more about the rapidly changing EFB market and the different levels of EFB.) While it doesn’t provide all the capabilities that the more robust, dedicated aviation computers used by airlines do, the iPad can supplement panel-mounted displays and in some cases replace paper resources. 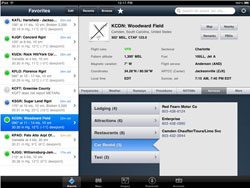 ForeFlight, the provider of one of two AOPA Airports mobile applications, redesigned its Preflight Intelligence iPhone app with the iPad’s larger screen and capabilities in mind, and released ForeFlight Mobile HD the day the first iPads shipped.

“We’ve been blown away,” said ForeFlight co-founder Jason Miller about pilots’ reactions to using the new ForeFlight app for the iPad. “The excitement level has been off the charts from what we’ve seen in the past.”

Co-founder Tyson Weihs said the company made weather content a centerpiece of the app and redesigned each screen when it adapted the iPhone app for the iPad to create a “gorgeous user interface” that takes advantage of the larger screen size. Weather is a key component of flight planning, and users can switch between 10 different weather maps as well as get METARs and TAFs.

ForeFlight Mobile HD provides access to weather maps and information; airport data, from approach plates to nearby restaurants; electronic sectional charts; TFRs, icing charts, and sigmets; and more. It shrinks the array of papers and flight planning tools in the traditional pilot’s arsenal to a single screen with up-to-date information only a few taps away. Information in digital form has the added benefit of frequent updates; ForeFlight releases more than four gigabytes of downloadable plates, VFR/IFR charts, airport diagrams, and airport information every 28 days.

But is it legal to rely solely on the iPad for information normally obtained on paper? Pilots in Part 91 operations have less stringent rules than commercial operators, and the FAA does allow some paper information to be replaced by electronic information— see the 2007 advisory circular on the subject. The bottom line: The pilot in command is responsible for having the right materials for each flight. And adjusting to a new interface—however user-friendly—should be done safely on the ground. 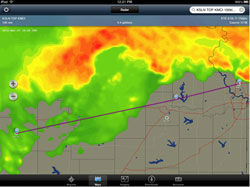 In the air, the ForeFlight founders see the iPad as a supplement to existing electronics, not a replacement.

“We’re focused on being a really great companion for the pilot,” Weihs said in an e-mail. “We’re not trying to compete with the avionics stack, which is what pilots should be relying on for primary navigation. The iPad’s a consumer-oriented device, and lacks the robustness of the navigational electronics you find in modern flight decks.”

Devices built specifically for aviation must meet minimum performance standards set by the FAA. The iPad has not—or at least not yet—gone through the process of being certified as a Class 1 EFB, but Part 91 operators of smaller aircraft do not require any specific authorization for EFB operations provided the EFB does not replace any system or equipment required by the regulations. ( See the 2003 advisory circular that gives information about the certification, airworthiness, and the operational approval of EFBs.) Just as a handheld GPS should not be a pilot’s exclusive navigation tool, an iPad should not replace FAA-certified electronics in the cockpit.

So what is the advantage of using a consumer device like the iPad rather than a computer used exclusively for aviation? Cost, for one. And Weihs said the unique capabilities of the iPad—the way the user interacts with it, the ability to include a high-end graphics engine, and the ability to connect seamlessly with the Internet—appealed to the company’s creative vision.

“I think pilots are so excited about it because it’s the first device they can buy for a pretty low cost … and you can get a device that’s reliable, it’s got a 10-hour battery charge … and it’s really reducing the cost of managing and downloading all of the information you need to fly,” Weihs said.