Get the app Get the app
Already a member? Please login below for an enhanced experience. Not a member? Join today
News & Media &lsquo;It&rsquo;s just a mess&rsquo; 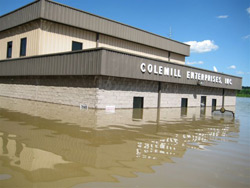 As Nashville residents return to their homes and offices to clean up from the recent flooding, tenants at Cornelia Fort Airpark headed to the airport May 6--not to assess the damage, but to figure out how to pick up and start over.

“It’s a loss that’s going to be hard to recover from, but we’re gonna try,” said Bill Colbert Jr., who joined the family business of running the privately owned, public-use airport 19 years ago after he retired from the military. His father has been involved with the airpark since it was founded in 1944 and has owned it since the 1950s.

The waters rose so quickly that only one of the 30 based aircraft escaped the damaging flood, but even it still had water in its tail and interior. The aircraft owner was able to move it to the highest point on the airport so that the engine at least remained out of the water.

“We did not expect it to crest at 13 feet above flood stage” at the airport, Colbert said, explaining that the airport, which is located next to the Cumberland River, has flooded before but never to this extent. “Today was the first day we were able to get back in the warehouse,” he said of the building housing the other family business, Colemill Enterprises, Inc., which offers charter services, airframe and avionics maintenance, conversions, and flight instruction. 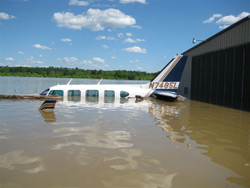 As of May 6, other hangars on the field still had water in them, including one that housed two King Airs (at crest the water was up to the windshield on both), and the taxiway was completely submerged, but parts of the runway were starting to appear. A hill behind the Colemill building slid, causing further damage, and the airpark’s fuel tanks came loose, floating about 10 feet before coming to rest against a hangar.

The water, which rose to six to eight feet in some hangars, isn’t expected to fully recede from the airport until Saturday. Power likely won’t be restored for more than a week.

“Right now we’re just trying to get some professional companies in here to clean up,” Colbert said, “and then we’ll have to start rebuilding.” 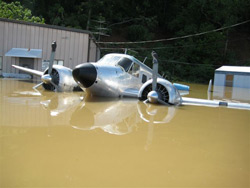 John Mrzena, who works in the parts department at Colemill Enterprises, said the water was four to five feet deep in the parts room where he was starting the cleanup process, sanitizing tables and chairs in the office. “It’s just a mess,” he said.

Insurance brokers have started coming to the airpark to assess the aircraft where the water has receded enough. So far, all that have been inspected have been totaled.

Colbert has notified the FAA to issue a notam closing the airport. “It’s a pretty sad story,” he said. “It’s just going to take time” to clean up and reopen.