Get the app Get the app
Already a member? Please login below for an enhanced experience. Not a member? Join today
News & Media Homebuilt pilot collects 100 speed records 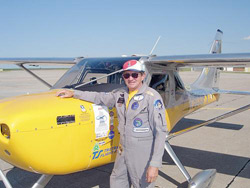 Steve Wood, editor of av8magazine.com, has reached 100 world records in his homebuilt GlaStar. Eleven of the records are awaiting verification. The records were set at speeds of 121 to 139 knots, except for one set at 160 knots.

The last 11 records were all set on the same day in April on one nonstop flight from Daytona Beach, Fla., to Nassau, Bahamas, and return on an IFR flight plan. His five-hour flight included a lengthy climb to 11,000 feet so he could start the records from the cruising altitude.

Wood said he believes he is first pilot to set 100 Fédération Aéronautique Internationale (FAI) world records in an FAA-registered homebuilt aircraft. Prior to the April flight, Wood had set 90 FAI world records, all of which have been ratified. These include 52 records involving the Bahamas, including a transcontinental record from Freeport to San Diego.

The records are all in Class C-1b, which is the weight category for a GlaStar. There was only one exception where he set an absolute record in Class C1, which is the class for airplanes of any weight.