Get the app Get the app
Already a member? Please login below for an enhanced experience. Not a member? Join today
News & Media Wounded Warriors lift off with Vandy-1

Wounded Warriors lift off with Vandy-1 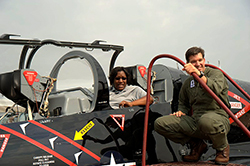 Maj. Lisa Maddox had been fascinated by military jets since watching the U.S. Navy’s Blue Angels as a young girl in Augusta, Ga.—but she never thought she’d have the opportunity to fly in an aerobatic jet.

“I never thought I’d get a chance,” said Maddox, a 1989 graduate of the U.S. Military Academy at West Point and now a medical doctor. “But the experience was just unbelievable. Flying that close to other airplanes at those kinds of speeds was amazing—like nothing else I’ve ever done.”

Maddox flew as a passenger in an aerobatic MS760 (Paris Jet) at Frederick Municipal Airport May 12, one of four veterans with service-related injuries who took rides courtesy of the Wounded Warrior Project, a charitable organization that sponsors outreach programs for veterans hurt in the line of duty. The flights were part of an agreement between the Wounded Warrior Project and the Vandy-1 demonstration team. AOPA hosted Vandy-1’s two L-39 Albatroses, along with Warbirds Over Long Island's P-51 Mustang, Team MS760's two jets, and a B-25 at the association’s ramp on the airport. 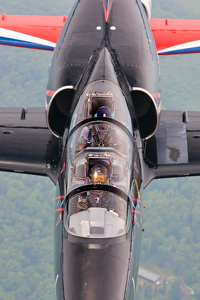 Vandy-1 will promote the Wounded Warrior Project at airshows throughout the United States, including the Joint Services Open House at Andrews Air Force Base May 14 through 16. The team’s flagship black L-39 traded its normal VX-9 logo for the Wounded Warrior Project insignia, and the wounded warrior wing and wounded warrior heritage flight formations honor injured service members.

“These guys fly together so much, and they have so much experience, it’s like they’re one brain,” said Maddox, 42. “It was phenomenal.”

“Nothing I’ve ever done quite compares to this,” said Duncan, a student at the University of Denver who lost both legs in Afghanistan in 2005. “This was on a completely different level. I feel extremely fortunate to have had the chance.”

Duncan skis, hikes, and is preparing to climb Mt. Kilimanjaro, a 19,200-foot peak in Africa this summer.

“I’ve always been a thrill-seeker at heart,” he said, “so there was no way I could pass up an experience like this.” 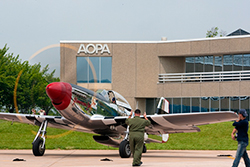 Sgt. Jason Grabill, 45, a former U.S. Marine who was serving at the Pentagon on 9/11, had been assigned to an aviation unit in South Carolina but never had the chance to fly in a military fighter.

On Wednesday, he looked down on his central Maryland home from a P-51 Mustang.

“It reminded me of the gun-camera footage from World War II,” Grabill said. “Except this was real, and it was in color.”

The five aircraft took off from Runway 23 in formation: first the P-51, then the MS760s, and then the L-39s. With the two MS760s tucked just below the P-51 and the L-39s at their wingtips, the formation maneuvered at 240 knots to the west of the airfield. Maddox, in the rear seat of the MS760 piloted by Capt. Dale “Snort” Snodgrass, waved to the MS760 to her right and snapped photographs of the other aircraft in tight formation. 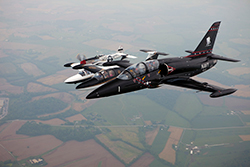 As the jets broke off from the formation, the two MS760s banked left and entered a roll together. The aircraft demonstrated aerobatic maneuvers separately before returning to formation and making passes at 400 feet agl over the runway. They landed and taxied back to the ramp, where spectators awaited with ears plugged.

Sgt. David Hatmaker, a former U.S. Army bomb dog handler injured in Iraq on his fourth overseas deployment in 2007, said riding through aerobatic maneuvers in the MS760 reminded him of “that carnival ride where you’re stuck to the wall.”

Larry Kelley, owner and pilot of the B-25 “Panchito,” has been supporting the Disabled American Veterans organization for about six years and regularly takes members flying in his World War II-era aircraft. 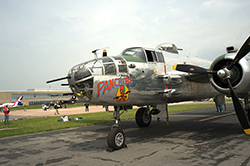 Kelley, a retired pharmacy supplier, has flown his twin-engine bomber over large events such as the Superbowl and Indianapolis 500, but he says he looks forward to meeting veterans individually and thanking them for their courage and sacrifices.

“They say the World War II-generation was the greatest generation—and perhaps that’s true,” Kelley said. “But these kids we’ve got in Iraq and Afghanistan are going to be our next greatest generation, and I’m thrilled to be able to do little things like this to honor them. Too many of us do nothing. We all ought to be doing more.”